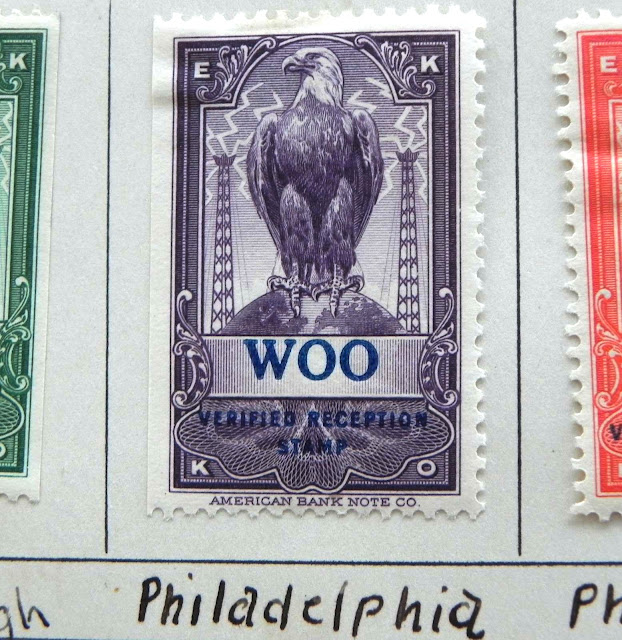 In the 1920s, when radio was as new and exciting as computers are now, amateur radio enthusiasts recorded their successes by obtaining "verified reception" stamps.


Other companies produced verified reception stamps, but it was the Ekko Company of Chicago, Ill., that started and promoted collecting these stamps as a real part of radio history. Ekko came up with the gimmick of selling broadcast radio stations on the idea of giving verified reception stamps to their listeners. This promotion would enable the station to determine the size and location of its listening audience.

The process was very simple. For only $1.75, the Ekko Company offered an album to the collector of new stamps. The album contains pages preprinted with an outline of each of the stamps currently available, a listing of broadcast station call letters and wavelengths, and a nice map on the inside cover showing the locations of these stations...

"Proof of Reception" cards were furnished with the album. Listeners needed only to send a few facts on these cards about when and where on the dial they had heard a broadcast, plus ten cents to cover mailing costs, to the station. There the card was checked against the station log for accuracy, and the listener was mailed a stamp with the station's call letters and design upon it...

Over 700 stations, ranging from KDKA, broadcast radio's pioneer station, to little KFXF in Colorado Springs, Colorado, participated in this promotion. Radio stamp collecting was a popular hobby from its conception in 1924 until the listening public lost interest in the 1930s. There were stamps for stations from nearly every state, as well as Canada, Cuba, and Mexico. Stamps came in varying basic colors including purple, orange, blue, green, and yellow with the call letters overprinted in red or one of the basic colors that contrasted well.

Printed by the American Bank Note Company, the United States Ekkos were a very high quality stamp. They normally pictured a bald eagle, flanked on either side by a radio tower and the letters "E K K O" on the corners. Canadian stamps used a beaver instead of the eagle. Cuba and Mexico used the United States design, but they were easily distinguishable because their call letters started with a "C"or "X."

There's more information at Antique Radio Classified and in this eBay guide.  As shown in the embed above, the quality of the stamps was excellent.  The American Bank Note Company was a premier quality engraver of stamps and currency for countries around the world.

These stamps fall outside the traditional realm of philately since they were used for commercial rather than postal purposes; they are included in what are called "cinderellas" along with Christmas and Easter seals, but are still highly collectible.  Quite a few of them are currently for sale on eBay, sometimes for impressive prices.