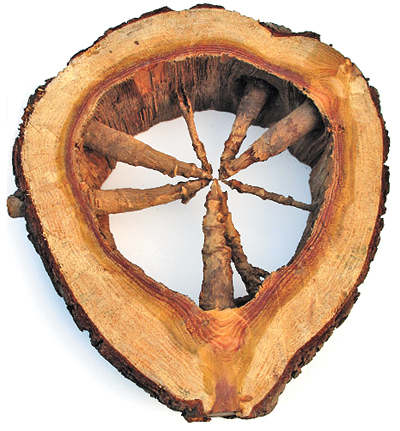 The image above shows an entirely natural phenomenon, occurring inside the hollow (rotten) core of a white pine.


Whorled branch cores look like spokes inside the trunk of a white pine, top. The cores were resistant to the rot that consumed the center of the tree, which walled off the damage and continued to grow new wood for more than 20 years.

When I was a little kid, my parents and I used to search the woods for fallen rotten pine logs.  Opening them would sometimes reveal two treasures - grubs that could be used for fishing bait, and "knots" I suppose similar to the above, which were fragrant additions to the fireplace.

Text and image from an entry in the Washington Post's fascinating Urban Jungle series.