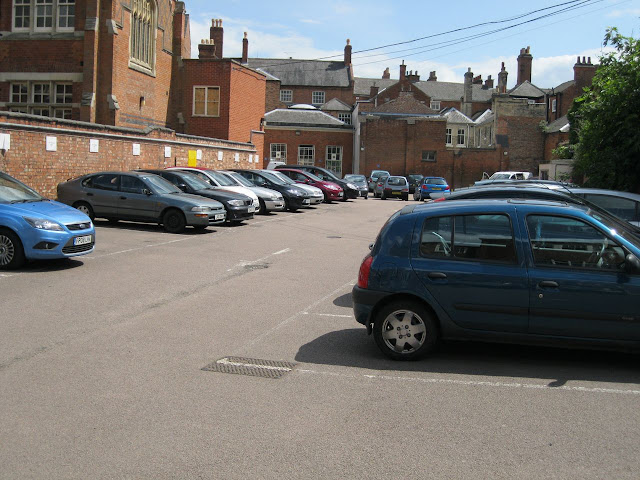 Richard III just can't get a break.  Maybe it's true that he wasn't a nice guy, but there are arguments that he should be presumed innocent of the murder of the princes in the tower.  And after his death his Plantagenet relatives were murdered and executed by the Tudors, and his reputation was slimed for all eternity by a descendent of the Oxford who led the Tudor forces against Richard at the Battle of Bosworth Field.

And now...  The History Blog has the rest of the story:


One of his [Henry VII] first acts as monarch the day after the battle was to bring Richard’s body to nearby Leicester where it would be exposed, naked, and then hanged for all to see... the friars buried him unceremoniously in their abbey... In November of 1538, the Greyfriars abbey and church in Leicester was destroyed. There is no record from that time describing what happened to Richard’s tomb and remains... As the centuries passed, development entirely changed the cityscape and the exact location of Greyfriars church was lost...

University of Leicester experts used map regression analysis (a systematic comparison of different kinds of maps from different eras) to pinpoint the most likely site of the former Greyfriars church. It’s a parking lot used by the Leicester City Council... The parking lot was surveyed Friday with ground-penetrating radar, and several archaeological hot spots were identified. Today the excavation begins.

For more about the Greyfriars project and Richard III, see the University of Leicester’s microsite.

The History Blog also includes a video interview with the lead archaeologist on the project.


The skeleton was an adult male, who appeared fit and strong. He had suffered significant trauma to the head where a blade had cut away part of the back of his skull; an injury consistent with battle.

A barbed arrow head was found lodged between vertebrae in his upper back, and spinal abnormalities pointed to the fact that he had severe scoliosis, a form of spinal curvature. This would have made his right shoulder appear visibly higher than his left, which is consistent with contemporary accounts of Richard’s appearance...

Miss Langley said: “This story has never reached a conclusion. The last two years of Richard’s life history were written by the Tudors and paint a picture of an evil hunchback with a withered arm.

“That is totally at odds with what we know about the last 30 years and it is quite normal for the vanquisher to paint a negative picture.

“Richard was responsible for a lot of the laws that today uphold personal freedom – the right to justice whether rich or poor, the presumption of innocence, the clear title of property – so everyone has an interest in being able to piece together his full story.”

Second Addendum  (Feb 2013):  The skeleton is confirmed as Richard's.  Here's a photograph of the rearticulated skeleton (via the BBC): 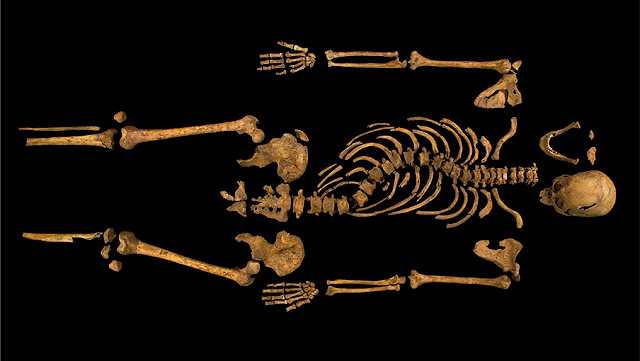 I'm impressed that the curvature is so low in the thoracic spine, and note that it's not from a vertebral collapse, which is probably why he was able to be so active, going to battle and all.  DNA from dental pulp has been matched to that of a living known descendant.  There are lots more details in The Guardian and elsewhere - enough to justify a new separate post, but I'm quite happy with the title I wrote for this post, so I'll just update it.