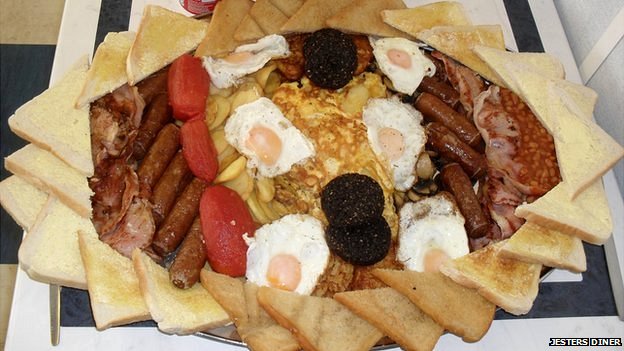 It's called that because it weighs the same as a small child.


Consisting of a dozen sausages, 12 bacon rashers and enough eggs to be produced from a coop of chickens in a week, Jesters Diner's fry-up in Great Yarmouth contains more than 6,000 calories and weighs in at 9lb (4.08kg).

But despite hundreds being sold after it was first put on the menu 18 months ago, only one person has managed to eat "the baby".

The restaurant "invites contestants to eat the breakfast in 60 minutes, with no additional help, to get it free of charge.  Its price if you fail is £15."  The restaurant acknowledges that offering it is a stunt: "It is what it is. It was done as a laugh and 99% of the population understands that."

The other 1% want it banned.  I would think you'd take five friends and divvy it up for breakfast.

Story at the BBC.  Video here.