Word for the day: cremello 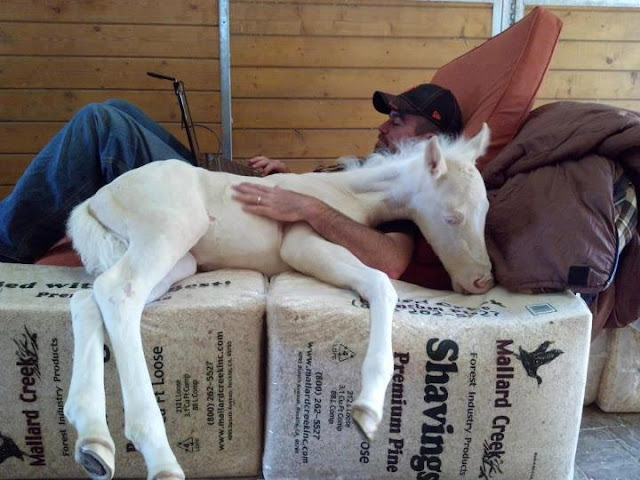 
Its a Cremello; A coloration rather than a pigment disorder. Albinos would have pink eyes, whereas Cremellos have pale blue eyes...

A true "white" horse would already be dead as well - the genes associated for a pure white horse contain fatal flaws, known as Lethal White Syndrome, that cause white foals to either be born dead or die within the first day - usually much less time than that...

LWS can also be carried way back in the lineage of the horses, not strictly limited to the Frame Overo cross (they're just known carriers). As thirdpeppermint said, conscious breeders should test for the gene to make sure they're not accidentally breeding it into their lines. Also, the foals aren't really missing a large section of digestion tract. They do commonly have impaired colon development (so the colon may be severely narrowed or even closed off in places). The mark of this disease is the missing myenteric plexus from the ileum caudally. The myenteric plexus is part of the enteric nervous system in the GI responsible for peristalsis, meaning there's no movement of ingesta through the GI tract, resulting in colic-y clinical signs and eventual death

More at the thread.  You learn something every day.

And a hat tip to Dr. Mieke for offering a link to genetic information at the Cremello and Perlino Education Association.

The photo was taken at the 2012 Calgary Stampede by Stu Winston.  Via Soul Dipper, with a hat tip to Kelly Durette at Deformutilation.