With all the fuss and publicity this week surrounding the identification of Richard III's skeleton, I think it's appropriate to stop for a moment to remember the author whose book first got me interested in Richard's life.  The best online biography I found is at Josephine Tey - A Very Private Person.

Josephine Tey [1896-1952] was the pseudonym under which [Elizabeth] Mackintosh published mystery novels. Miss Mackintosh used a second pseudonym, Gordon Daviot, for plays and also in her personal life, which she guarded jealously... Tey avoided the press, shunned photographers, and never granted interviews. For this reason, and the fact that she kept a small circle of friends, Tey is a difficult subject for biographers... 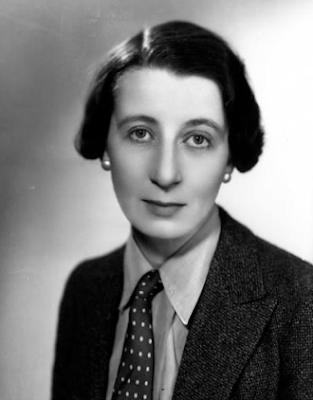 She was educated at Inverness Royal Academy, and, from 1914 to 1917, at the Anstey Physical Training College in Erdington, Birmingham...She taught briefly in schools in Liverpool and in Oban where she was injured in a gymnasium accident which she later used as a murder method in her novel Miss Pym Disposes...

Josephine Tey, which combines her mother's name with the surname of her English grandmother, was first used in 1937 for Tey's second mystery, A Shilling for Candles...

Her detective novels are classics of their kind, deftly constructed with strong characterisation and a meticulous prose style. Six of them feature as their main character the slightly built, dapper Inspector Alan Grant, a gentleman police officer... It is Grant who, in Tey's most original story, The Daughter of Time (1951), while immobilized in hospital, satisfies himself by reading and reason that the infamous Richard III of Shakespeare, school history books, and folk memory, is a Tudor fabrication...

She died of cancer of the liver... on 13 February 1952. Many of her theatre friends attended the funeral service, including Dame Edith Evans and Sir John Gielgud. Josephine Tey left her entire estate, valued at £26,718, along with the proceeds from her writings (which has amounted to about half a million pounds) to the National Trust for England.

In August of 2011 I posted a link to the "top 100 crime novels ever written."  I am pleased to note that according to the British-based Crime Writer's Association, Josephine Tey's The Daughter of Time is #1 on their list.

See also Is this the face of a murderer?