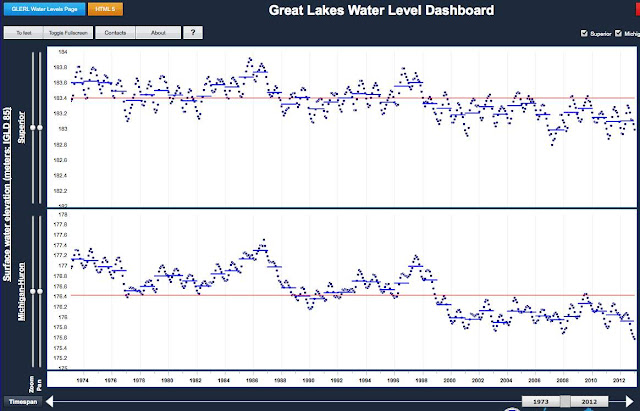 I first saw the news in an Associated Press story:


Two of the Great Lakes have hit their lowest water levels ever recorded, the U.S. Army Corps of Engineers said Tuesday, capping more than a decade of below-normal rain and snowfall and higher temperatures that boost evaporation.

Measurements taken last month show Lake Huron and Lake Michigan have reached their lowest ebb since record keeping began in 1918, and the lakes could set additional records over the next few months, the corps said. The lakes were 29 inches below their long-term average and had declined 17 inches since January 2012.  The other Great Lakes - Superior, Erie and Ontario - were also well below average...

Scientists say lake levels are cyclical and controlled mostly by nature. They began a steep decline in the late 1990s and have usually lagged well below their historical averages since then.

But studies have shown that Huron and Michigan fell by 10 to 16 inches because of dredging over the years to deepen the navigational channel in the St. Clair River, most recently in the 1960s. Dredging of the river, which is on the south end of Lake Huron, accelerated the flow of water southward from the two lakes toward Lake Erie and Lake Ontario, and eventually into the Atlantic Ocean.

A CNN article gave more details of the economic consequences:

-- The coal trade on the Great Lakes declined 8.2% in 2012 from the previous year, and down a quarter off the 5-year-averge -- in large part due to falling water levels and a $200 million backlog in necessary dredging throughout the lakes, according to the Lake Carriers' Association.
-- Commercial fishing boats are finding it increasingly difficult to navigate some harbors, risking a downturn in a vital part of the Great Lakes economy...
-- Charter boat operations and other businesses in coastal communities that depend on tourism fear the impact lower water levels will have from spring to fall, when tens of thousands of people flow into the state to boat, fish, eat out and shop.

There's too little data to say the problem is a product of global warming, he said. It's also a cycle that's been seen before.  Lake levels were nearly this low in December 1964, and it's the March 1964 record that's likely to fall in the next few months.  There is hope, he said. Records dating back to 1918 would seem to indicate a cyclical pattern that could well result in record lake levels in the next few years, he said. Such swings occurred in the 1970s and 1980s after similar low points.

The embedded image at the top comes from the National Oceanic and Atmospheric Administration's Great Lakes Environmental Research Laboratory, which has an impressive interactive widget that allows you to view water levels and related data for all recorded history (and extrapolated back to the Paleolithic).

Depending on the slope of the shoreline, when you drop water levels a vertical foot, you may expose 5-10 feet of lakebed.  A concern for homeowners with docks and such, but also a boon for archaeological discoveries and for elderly retired men with metal detectors looking for old coins.