Disease of the day: podoconiosis 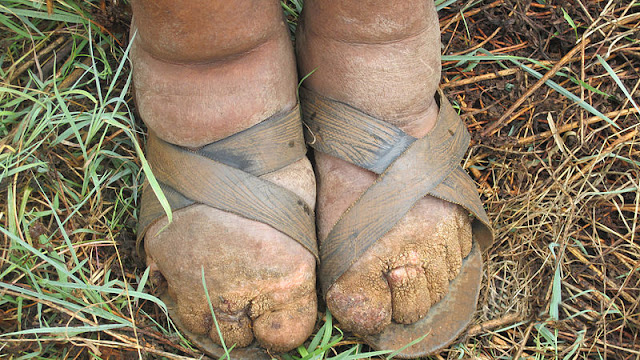 Excerpts from the Wikipedia entry:

After parasitic filariae were discovered to be a cause of tropical lymphedema in the 19th century, early investigators assumed that filariae were the sole cause of the disease...  Ernest W. Price, a British surgeon living in Ethiopia, discovered the true etiology of podoconiosis in the 1970s and 1980s by studying the lymph nodes and vessels of those afflicted with the disease. Using light microscopy, Price discovered macrophage cells laden with micro-particles in lymph nodes of the affected extremity. Then, examining the same tissue using electron microscopy, he was able to identify the presence of silicon, aluminum, and other soil metals both in the phagosomes of macrophages and adhered to the surface of lymphocytes...

The pathophysiology of podoconiosis is a combination of an uncharacterized genetic susceptibility and a cumulative exposure to irritant soil. In susceptible individuals, irritant soil particles are absorbed through the feet and collect in lymphatic vessels and nodes. Over time, subendothelial edema occurs within the lymphatic vessels and collagenization of the lumen leads to complete blockage...

Pathogenetically and gramatically similar to pneumoconiosis, just substituting the podo of feet for the pneumo of lungs.  Fascinating.   I wonder if this happens to a subclinical degree in other people who frequently go barefoot, and if it would exacerbate pedal edema from other causes when they get older.