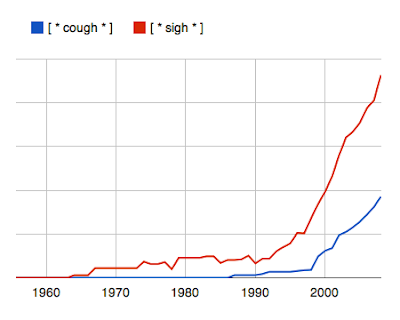 Daring Fireball notes the rising incidence of the use of bounding asterisks to denote emphasis:


Where by “emphasis” I mean “informing the reader of a shift in style or voice”, such as how foreign words are italicized in many publications and books. Using asterisks this way strikes me as an Internet-ism. I would think those coughs should be italicized; using bounding asterisks is a substitute in plain text contexts, something we collectively started doing in email, newsgroups, web comments and forums, Twitter, and various other input fields where computer software doesn’t allow proper italics (or bold, or any other formatting). 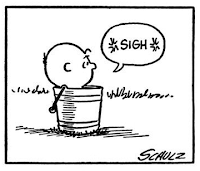 After obtaining the graph above using Google's Ngram viewer, he speculates that the rise of *cough* is internet-based, but the earlier (1960s) rise of *sigh* can be attributed to Charles Schulz.

I hadn't noticed the phenomenon and haven't made use of it.  Added to repertoire.