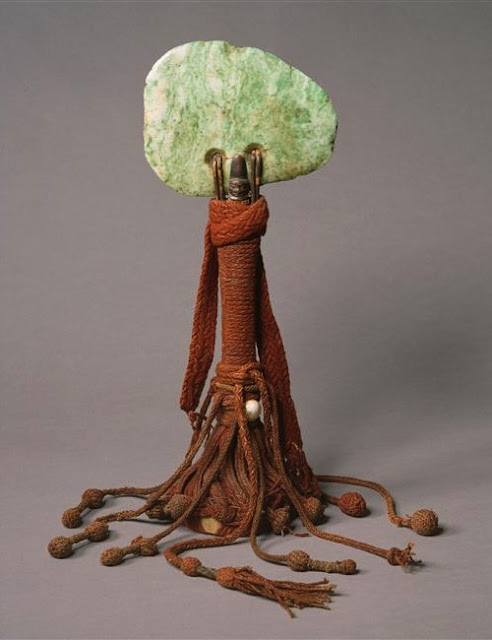 A ritual axe from Berlin's Ethnologisches Museum, which I found posted at A London Salmagundi.  Made in New Caledonia (?when), of hair, jadeite, shell, stone, and textile (source).

I found more explanation re the name of the object at Tribal Art:


Admiral Bruny d’Entrecasteaux and his sailors were the first in the West to encounter an unusual object... in what we now know as New Caledonia from April 17–May 3, 1793. His stay was longer than Captain Cook’s in 1774, and he was able to observe objects other than the spears and clubs that his illustrious predecessor had seen. While there, he was presented with an object that he had difficulty describing. He thought that it slightly resembled the monstrance used in Catholic ritual in connection with the Host, and to this day the term remains part of the French name for the object, which is called hache ostensoir, or “monstrance axe.”

Additional information at Tribal Art and at the Ngilong Art Gallery.