The Oronteus Fineus map of an "ice-free Antarctica" 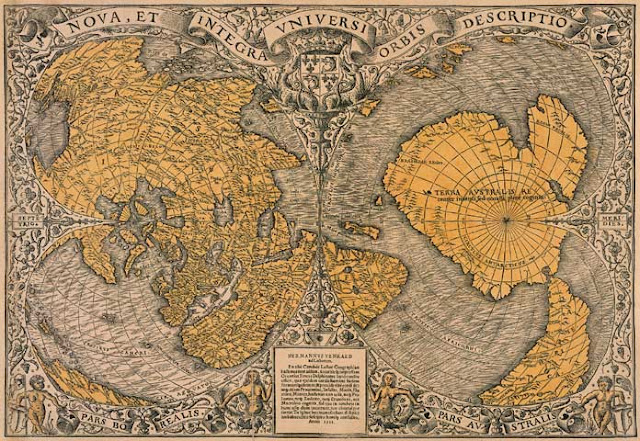 One of my "guilty pleasures" has been the reading of what some would term "fringe archaeology" articles and books - material that advocates viewpoints not in line with mainstream historical archaeology and history:  Vikings in America (the Kensington Runestone),  ancient astronauts (the Chariots of the Gods, the Nazca lines), lost continents, "unexplainable" artifacts, Zheng He's voyages to the Americas...

Occasionally I encounter references to an "ice-free Antarctica" and maps depicting it, including one I stumbled upon this week at Ancient Destructions -


In 1959, however, in the Library of Congress, Hapgood noticed a presumably authentic map that instantly wiped out his doubts: a map of what was almost certainly Antarctica, done in 1531 by the French cartographer Oronce Fine, also known as Oronteus Finaeus... Admittedly it is too close to the tip of South America, and it is incorrectly oriented, yet the proportions seem similar, the coastal mountains, found in the 1957 geophysical study are in roughly the right places and so are many bays and rivers. Furthermore, the shape of South America itself seems right, and the close resemblance between a modern, scientifically exact map of the Ross Sea and Finaeus' unnamed gulf is striking.

What is different, however, is that the Oronteus Finaeus map does not seem to show the great shelves of ice that, today, surround the continent, nor the great glaciers that fringe the coastal regions. Instead there seem to be estuaries and inlets, suggesting great rivers... It also suggested to Hapgood that since the Antarctic was certainly ice-bound in 1531 - when Oronteus Finaeus made his map - Finaeus must have had access to very ancient maps indeed: maps made when Antarctica was largely free of the mile-thick ice cap that buries it today, and presumably has covered it for millennia.

I've embedded the map above, and it is quite striking for a document from the early 1500s.  It took a bit of searching today, but I finally found a well-written (and extensively illustrated) site that addresses these questions from a "mainstream" point-of-view.

Some of the land depicted to the south of South America may be Antarctica, but the map also conflates that land mass with Tierra do Fuego itself and, more significantly, the continent of Australia (see the screencap above).

So much for an ice-free Antarctica within recorded human history.  But the Kensington Runesone and Zheng He's voyages are still intriguing possibilities...  Stay tuned.