Someone should invite Jay Leno and Ann Landers to a party 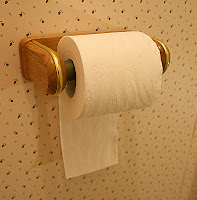 An immensely detailed article in Wikipedia discusses "toilet paper orientation," presenting the pros and cons of the "over" configuation vs. the "under" configuation (shown above).


"The choice is largely a matter of personal preference, dictated by habit. In surveys of American consumers and of bath and kitchen specialists, 60–70% of respondents prefer over.

Despite being a trivial topic, people often hold strong opinions on the matter. Advice columnist Ann Landers said that the subject was the most controversial issue in her column's history. Defenders of either position cite advantages ranging from aesthetics, hospitality, and cleanliness; to paper conservation and the ease of detaching individual squares. Celebrities and experts are found on both sides..."

Those with time to kill during this blizzard are invited to peruse the entire article, but what caught my attention were quotations from two celebrities:


Favoring "Over":  Jay Leno, comedian. Leno "...will even change the paper at others' houses, saying if people don't have it right, they obviously don't know which way it's supposed to go."

Favoring "Under":  Ann Landers, advice columnist: "I'm very compulsive about it. The toilet paper needs to be hung down along the wall. I'll actually rearrange it myself if I'm over at someone's home and I see it hung over the top."