Severed feet at the Battle of Visby 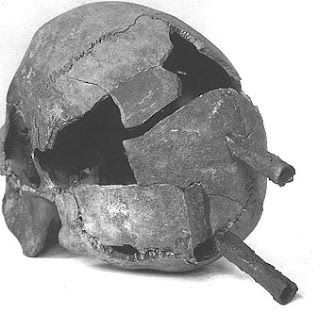 "The 2,000 bloody, mangled, and hacked bodies were immediately buried in a hastily-dug pit on a hot sumer day, July 27, 1361... During the last century these bodies were exhumed and examined.  Most had their left foot (the leading foot exposed under the shield) axed off..."

From page 101 of  The Kensington Rune Stone: Compelling New Evidence, by Richard Nielsen and Scott Wolter, 2006.  While fact-checking the statement above, I found an interesting account of the battle, including the photo above, described as follows:


War hammers were also in evidence where a square section of the hammer head showing in the shape of the section of the skull which had been stove in. See the picture... which points to three bodkin arrow points which had penetrated the skull and two holes where a hammer had been used and the skull split between them...

Which came first is unknown. A number of guesses can be made such as two quick hammer blows to fell the man and the arrows landing after, or a hail of arrows which he had turned his back on and then later two hammer blows to put him out of his misery...

The grouping of the arrow heads is particularly spectacular and it makes one wonder if they used the tactic of a hail of arrows as in the later battle of Crecy where it is said the English Longbow men kept 100,000 arrows in the air at one time.