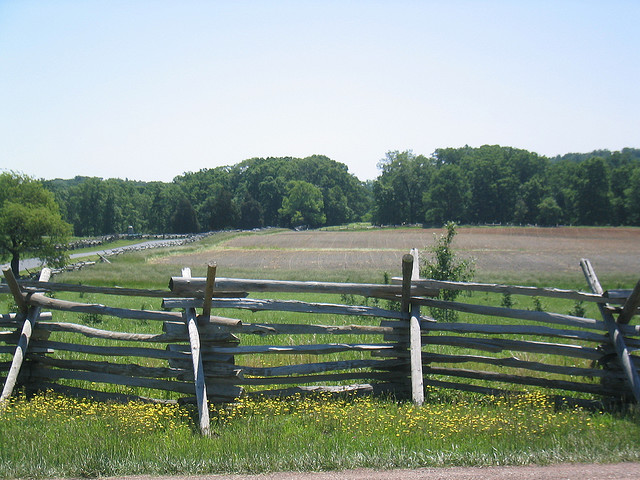 This is the iconic fence of American Civil War movies.  The OED tracks the use of snake fence to the beginning of the nineteenth century -


(1805) R. Parkinson Tour Amer. I. i. 48   Snake-fences; which are rails laid with the ends of one upon the other, from eight to sixteen in number in one length.

- and defines it as an American idiom.   Worm fence has been noted as early as 1833; other terms include "zigzag fence" and "battlefield fence."   The best description I've found is at a page by the Forest Preserve District of Cook County (Illinois):


Very few new rails are made any more because they can only be split successfully from large, straight, solid logs without knots, such as the oaks and walnuts that grew in virgin timber.

The log was cut four "ax handles" long -- about eleven feet. The bark was peeled off and wooden mauls and wooden wedges, made of ironwood or other very hard wood, were used to split it into halves, then quarters, then eighths, like pieces of pie. These in turn were split into  roughly triangular or rectangular rails measuring about 4 by 4 or 3 by 5 inches. The rails were laid on the ground in a very exact zigzag pattern with the ends extending a little over a foot from where they crossed. After the fence was seven or eight rails high, each corner was strengthened and braced by two other rails, or stakes, one on each side, sunk a foot or more in the ground and slanted upward to cross and hold the fence in place. These stake rails, in turn, were locked in place by an additional horizontal rail or "rider". Between seven and eight thousand rails were needed to build a mile of "worm" fence -- enough to enclose a forty-acre field...

None remain except red oak, white oak and black walnut, weathered and gray but as sound as the day they were split. All those made from less durable woods are gone.

"Worm" fences seemed a prodigal waste of land in later years because they occupied from three to four times as much ground as the modern barbed wire and woven wire fences. They quickly grew up in wild roses, wild raspberries, wild blackberries, weeds and vines, furnishing food and cover for a host of wildlife. With the clearing of the timber and more and more intense cultivation of the land, these fences offered refuges where the quail, the cottontail rabbit and dozens of other birds and animals learned to live with civilization.

There is also a final notation that "Many an undesirable citizen left town riding on a rail" - a reminder that the "rail" in question is not a railroad, as some modern listeners assume.

Modern "stack rail" fence components are available from lumber/fence companies, recommended for rocky soils where posthole digging is to be avoided.