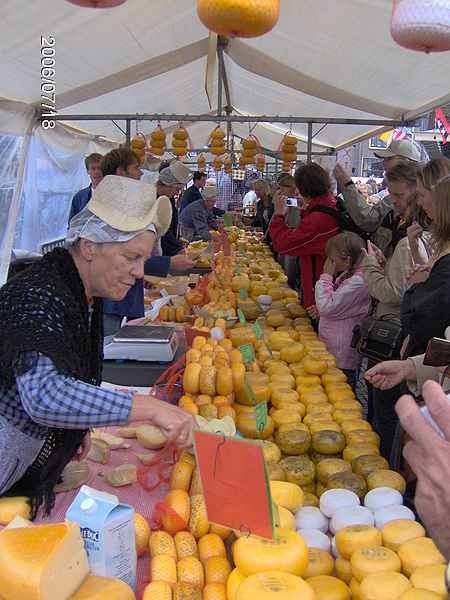 It's been about six weeks since I've done a smörgåsbord to clear out my stack of links, so there's lots to offer this morning.  While writing this up I discovered, sadly, that several links have already undergone linkrot; I need to do this at shorter intervals.  I wish I could feature some of these as full-scale posts, but there just isn't enough time in the world.  (With the Packers-Bears game just hours away, it seems appropriate for the header photo to use a selection of cheeses.)

At any given time there are 500,000,000 empty parking spaces in the United States, for 250,000,000 cars. ""Only in the last 5-10 years have we been giving some thought to whether there should be an abundance of free parking," said Chester. "Ninety-nine percent of automobile trips end in free parking and this has a major effect on people's choice of what means of transportation to take."

A large-scale investigation has revealed the extent to which medical patients, including Medicaid patients, are reselling their drugs to the public. "Often at no charge, the patients see a doctor, or several doctors, and come away with prescriptions for narcotic OxyContin and other pills they then sell to a dealer for as much as $1,000."... 65,000 Medicaid beneficiaries in New York and four other states had visited six or more doctors in fiscal 2006 and 2007 to acquire duplicate prescriptions for controlled substances.  The cost to Medicaid was $63 million for the drugs alone, excluding doctors' exams.

"A worshipper at a California mosque called frequently for violent jihad against the West.   This freaked out his fellow attendees so much that they took out a restraining order on him... and learned he was an informant planted by the FBI."

MasterCard and Visa will process donations for an organization that supports the KKK and which requires you to sign a statement confirming that you are a white racist.  But they will not process donations to Wikileaks.

Here's the study that shows airport backscanners cannot detect plastic explosives if they are formed to the body with tapered edges.

An essay at Mother Jones entitled "How the Oligarchs Took America" posits that "we are now a country run by rich people."

For those who don't live near New Jersey and are unfamiliar with the stereotype, this link has a picture of "guidos" and an explanation of their characteristics (about halfway down the discussion thread).

A bank has been implicated in a money-laundering scheme.  And not your everyday bank: "The ATMs are in Latin. Priests use a private entrance. A life-size portrait of Pope Benedict XVI hangs on the wall."  It's the Vatican bank.  And the moneylaundering was for the Mafia.

Allegations that tiny letters and numbers are hidden in the eyes of DaVinci's Mona Lisa.

The incredible backyard of an over-the-top M*A*S*H fan.

An article at the British Medical Journal discusses the medical implications of having red hair.  TL;DR conclusions: "... Red hair phenotype may confer an increased requirement for anaesthetics but is associated with no greater operative risk than the remainder of the population. It would seem that the reputation of people with red hair for having increased perioperative risk is without any basis in fact and should only be used as an excuse of last resort by surgeons defending problematic bleeding or recurrent hernias"

About twenty journalism school professors sign a letter of support of Wikileaks. "...while we hold varying opinions of Wikileaks' methods and decisions, we all believe that in publishing diplomatic cables Wikileaks is engaging in journalistic activity protected by the First Amendment. Any prosecution of Wikileaks' staff for receiving, possessing or publishing classified materials will set a dangerous precedent for reporters in any publication or medium..."

James Burke has a channel on YouTube through which it appears you can access the entire "Connections" series.

A long article explains the nuances of pubic hair removal, including the difference between a French wax and a Brazilian, explains "vajazzle," and asks why on God's green earth do 12-year-old girls feel a need to get bikini waxes? The answer seems to be “Virgin hair can be waxed so successfully that growth can be permanently stopped in just two to six sessions,” explains the web site for Wanda’s European Skin Care Center. “Save your child a lifetime of waxing … and put the money in the bank for her college education instead!”

An Aljazeera video examines the relationship between Hollywood filmmakers and the U.S. military.  "What does Hollywood get out of this 'deal with the devil'? Access to billions of dollars worth of military kit, from helicopters to aircraft carriers, enabling filmmakers to make bigger and more spectacular battle scenes, which in turn generate more box office revenue. Providing they accept the Pentagon's advice, even toe the party line and show the US military in a positive light."

A column at ScienceDaily discusses the new plant and fungal discoveries of 2010, including the world's longest known genome:  "...the largest genome of all living species so far -- found in Paris japonica, a subalpine plant endemic to Honshu, Japan. With a genome size of 152.23 picograms(9), its genome is 50 times the size of the human genome, and 15% larger than any other found so far -- it's so large that when stretched out it would be taller than the tower of Big Ben!"

The Washington Post details the revolving door intimacy between Washington lawmakers and the airport scanning industry -"About eight of every 10 registered lobbyists who work for scanner-technology companies previously held positions in the government or Congress, most commonly in the homeland security, aviation or intelligence fields..."


"Rubber rooms" were nicely explained in an episode of "This American Life" which I can't find at the moent, but this Chicago Sun-Times link explains "Roland Pierre was permanently removed from the classroom in 1997 after he was accused of sexually molesting a sixth-grade girl at a Brooklyn school. However, he must report daily to one of the system’s so-called “rubber rooms,” where teachers accused of wrongdoing or incompetence are assigned but do no work. Pierre has continued to receive full pay ­— $97, 101 — and fringe benefits, including health, pension and vacation, officials told the New York Post."
Deadspin asked readers to explain the unusual "side benefits" of certain jobs and professions.  The article itself and the comments below include some eye-openers.
An eight-year old New Zealand child was burned to death when he fell into a geothermal pool.
A photo gallery of cauliflower ears on rugby players.
In this video, a girl shows you how to throw a knife without rotating it during its flight.
Religion scholars discuss the Quran and the Bible with regard to allegations that passages in both of them promote violence and bloodshed.
The Innocence Blog reports on a man who spent 23 years in jail for a crime he didn't commit. "...under Wisconsin law he is eligible for only $25,000 in total  compensation."
Dark Roasted Blend has the list of its best posts for 2010.  I link to them less often than I should; you ought to peruse this list for items of interest.

On the other hand, I probably link to Glenn Greenwald's columns more often than I should.  In this one he examines the "merging" of journalism with government.

Instead of asking for "mother" and "father," new passport forms will ask for "parent one" and "parent two."

Bacteria actively consumed the methane gas escaping from he Deepwater Horizon well.  I don't understand how they can do this in the presumably short time it would take a bubble to reach the surface.

ScienceBlogs offers its candidates for the best science blogposts in 2010.  Absolutely some wonderful material here just waiting for you to read.

One of the most famous (notorious) college football games ever was referred to as "The Toilet Bowl."  You can read about it at Oregon Expat.

Here's a snarky (but funny) Twitter response to Sarah Palin.  And here's another one.  And a related (but not Palin-directed) tweet from Michael Moore.

Each year Der Spiegel presents a "pub quiz" which asks about some of the most unusual news items of the year.   Thanks to my role in preparing items for this blog, I got 13/16 right.  See how you do.

The Library of Congress has announced the 25 important films that will be added to the National Film Registry this year.  You will be quite (pleasantly) surprised at some of the entries.

You've probably heard that an IBM computer will be taking on Ken Jennings and Brad Rutter in a special episode of "Jeopardy."  A practice round has already been conducted (the computer won).  You can also read more about IBM's computer, Jeopardy questions, and the Wolfram/Alpha search engine at the Stephen Wolfram Blog.

The New York Times posts a proposed explanation of the dark matter of the universe: "My modest proposal is that the aliens are the cold dark matter that makes up 23 percent of the energy in the universe. Adept at cloaking themselves, they are invisible..."  This postulate comes from the "director of the Center for Extreme Quantum Information Theory at M.I.T." (??)

An article in Asia Times reports on "Sodomy and Sufism" in Afghanistan, and how male pedophilia is deeply engrained in the culture there.

An ABC News investigation reports that "More than 1,000 young American women have been raped or sexually assaulted in the last decade while serving as Peace Corps volunteers in foreign countries."

A mansion in central France has just been opened to the public.  It was locked up when the owner died - a hundred years ago. "Louis Mantin, a wealthy gentleman from the town of Moulins, stipulated in his will that his house should be turned into a museum a century after his death."  Lots of garish furniture.

Many thousands of Indian "devadasi" girls are placed in their profession as a matter of "religion" - ("Stretching back for centuries, the original devadasi were trained in prayer, dance and music...) but nowadays it basically provides a forum for sexual exploitation by pedophiles.

Caligula's tomb may have been found.  (Or not).  Excavations are now beginning.

Wisconsin funeral homes are facing the economic realities of providing burials for paupers and unidentified persons.

The man who started The Big Picture at Boston.com is now moving on to The Atlantic.  I think that's a big coup for the latter venue.

And lastly a dynamic periodic table of elements.  You can mouse over individual entries, click on vertical columns, select metal and nonmetal groups, move a temperature slider to see states, and so forth.  Tabs go to even more specialized content.

Enough for today.  Now it's time for football.