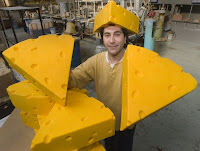 The Green Bay Packers play the Chicago Bears for the NFC championship this afternoon, so it's time to explain the cheeseheads:


"His name is Ralph Bruno, and 25 years ago he was an apprentice pattern maker from Milwaukee who was reupholstering his mother's living room furniture when he found himself holding a leftover cushion.

On a whim, he burned holes into the cushion until his mother shooed him outside because of the awful smell. In his backyard, he painted the cushion yellow and fitted it on his head...

That night, in a direct rebuttal to the Chicago fans who have long ridiculed Wisconsinites with the infamous one-word mockery of their state's most beloved product, he wore the invention to a baseball game between the Milwaukee Brewers and the Chicago White Sox.

"All my friends made fun of me; they thought I looked like an idiot," Bruno recalled this week. "But then a bunch of pretty girls came over and asked to wear it."

... the company [Foamation] has fewer than 10 employees who make the cheeseheads by hand in a nondescript warehouse near Milwaukee. Business gets so big before Bears games that they brought in several temporary workers this week...

In 1995, Frank Emmert of Superior, Wis., claimed that jamming a cheesehead over his face saved him from death during the crash landing of a light plane during his return from a Packers game."

More at the Los Angeles Times.