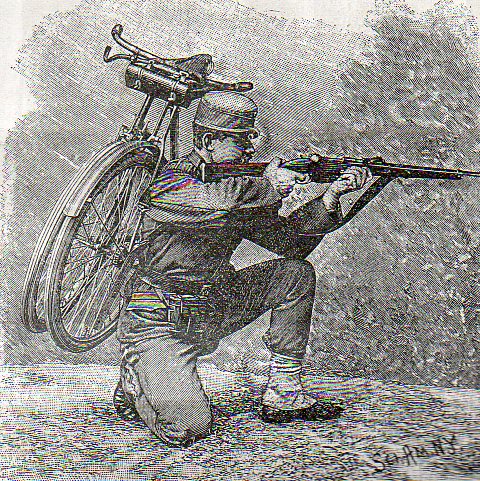 I encountered the image above in a column at Ptak Science Books:


When these pictures were published in 1897 interest in the bicycle was shattering; it was a popular conveyance, and then in just two or three years, an explosion:  millions of people suddenly needed one.  Bikes seemed to be everywhere,  which forced people to imagine new and different uses for the machine.  And so the Austrian army came up with a plan to include the bike in its plans of war, and it proved to be as about as useful as a double-decker horse...

A quick search revealed that there are a number of scholarly and comprehensive webpages devoted to this very subject, among them this page at The Liberator, which focuses on more modern U.S. military bicycles: 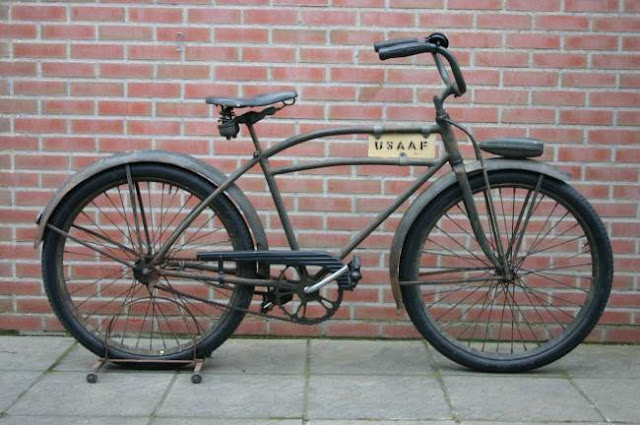 The 'Bicycle, Military, Universal' was adopted in October 1942 by the Ordnance Department. It was a military version of the Westfield 'Columbia' and was equipped with heavy duty rims and spokes. It came with a D-Cell powered headlight on the front fender and basic tools were carried in a tool bag attached to the Persons saddle. A tire pump was clamped to the frame...

The site includes a large number of photographs from the WWII era, and screencaps from two movies, including From Here To Eternity, featuring soldiers with bikes.

The BSA [Birmingham and Small Arms] & Military Bicycle Museum is extremely comprehensive.  I'll let you explore it, but can't resist closing with this contemporary photograph: 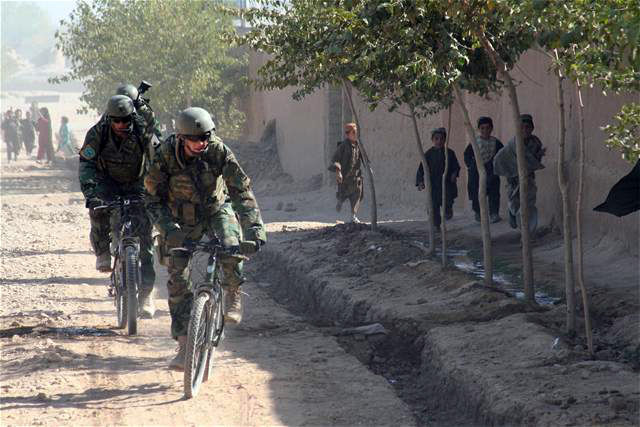 Soldiers on Bikes in Uruzgan: Dutch Marines have taken up mountain bikes to patrol their sector in Tarin Kowt, Afghanistan. Dutch marines yesterday began bike patrols in Tarin Kowt. It is now safe enough to do that. Usually the soldiers ride in all-terrain vehicles and armored vehicles throughout the provincial capital. The marines, part of the battle group, got the bikes so they can make better contact with the population. It is also a practical means of moving faster in inaccessible locations in the city. The Afghans have responded enthusiastically to the Dutch initiative. [Bron: Min. Defensie NL]