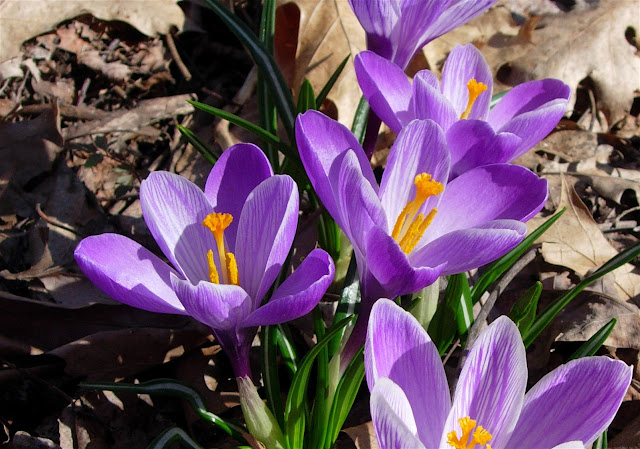 An article (and video) at Russia Today details some of the problems faced by saffron farmers in Kashmir, including damage to traditional fields from pollution.


Costing US$4,000 per kilogram, this pricey ingredient is used in medicine and South Asian cuisine... The biggest long-term challenge is the adulteration of saffron. Cheap, fake brands of saffron sell briskly on the streets of Srinagar. And it is virtually impossible for a non-professional to distinguish between a fake and the real one. This fact has dented saffron's image, and resulted in a drop in prices.

The word "saffron" (and Italian zafferano and Spanish azafrán) come from the Latin word safranum, probably ultimately from Persian and Arabic precursors.  The spice itself is extracted from the saffron crocus (C. sativus).  [The photo above is of non-saffron Wisconsin crocuses].  The following tidbits are excerpted from Wikipedia:


Saffron-based pigments have been found in 50,000 year-old depictions of prehistoric places in northwest Iran. Later, the Sumerians used wild-growing saffron in their remedies and magical potions. Saffron was an article of long-distance trade before the Minoan palace culture's 2nd millennium BC peak... During his Asian campaigns, Alexander the Great used Persian saffron in his infusions, rice, and baths as a curative for battle wounds. Alexander's troops imitated the practice from the Persians and brought saffron-bathing to Greece...

During the 14th century Black Death, demand for saffron-based medicine skyrocketed, and much saffron had to be imported via Venetian and Genoan ships from southern and Mediterranean lands... Cultivation and trade then spread to Nuremberg... Soon after, saffron cultivation spread throughout England, especially Norfolk and Suffolk... By 1730, the Pennsylvania Dutch were cultivating saffron throughout eastern Pennsylvania. Spanish colonies in the Caribbean bought large amounts of this new American saffron, and high demand ensured that saffron's list price on the Philadelphia commodities exchange was set equal to that of gold...

Saffron is graded via laboratory measurement of crocin (colour), picrocrocin (taste), and safranal (fragrance) content. Determination of non-stigma content ("floral waste content") and other extraneous matter such as inorganic material ("ash") are also key... Adulteration was first documented in Europe's Middle Ages, when those found selling adulterated saffron were executed under the Safranschou code. Typical methods include mixing in extraneous substances like beets, pomegranate fibers, red-dyed silk fibers, or the saffron crocus's tasteless and odorless yellow stamens. Other methods included dousing saffron fibers with viscid substances like honey or vegetable oil. However, powdered saffron is more prone to adulteration, with turmeric, paprika, and other powders used as diluting fillers. Adulteration can also consist of selling mislabeled mixes of different saffron grades. Thus, in India, high-grade Kashmiri saffron is often sold and mixed with cheaper Iranian imports; these mixes are then marketed as pure Kashmiri saffron, a development that has cost Kashmiri growers much of their income...