Word for the day: Deckle 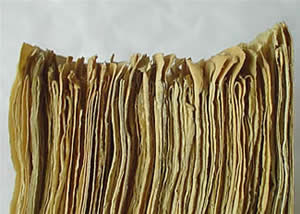 Several months ago I posted an item about fore-edge painting on books.  Today I found a post at The Millions that extensively discusses pages with deckle edges.


The deckle edge dates back to a time when you used to need a knife to read a book. Those rough edges simulate the look of pages that have been sliced open by the reader. The printing happened on large sheets of paper which were then folded into rectangles the size of the finished pages and bound. The reader then sliced open the folds...

Paggy Samedi, an associate production manager, told me that at Knopf where she works the deckle edge is part of the publisher’s “house style” along with certain other flourishes and fonts. It is typically used for more literary-oriented books and they see it as “something that harkens back to an older way.”

Nonetheless, the production department at Knopf regularly fields calls from readers who complain about the ragged edges, assuming they are a mistake...

If you look closely at a deckle edge, even if you are looking at two copies of the same book, you’ll see slight variations in the edges. And from title to title and publisher to publisher, the quality and pattern of the edges varies more extensively, from a tight saw-tooth, when looking from the top of the book down the edge of the pages, to a more free-form ragged look.

More at the link, where there is a photo showing the "tight saw-tooth" pattern.  The photo embedded above comes from Powell's Books, where there is another interesting discussion of the subject:


This isn't found in just hardbacks; the Penguin trade paper edition of Umberto Eco's The Island of the Day Before also sports edges that have not been trimmed close...

John Carter defines the term as "the rough, untrimmed edges of a sheet of hand made paper....Much prized by collectors."

Deckle is not merely "untrimmed." It is sort of "untrimmed" on steroids...

The French have been known to produce books with an edge that Carter calls "Gilt on the Rough," which means that gilt has been applied to the deckle edges as well as the close cut top edge...

And finally, re the word itself, I'll start with Wiki:


In (manual) papermaking, a deckle is a belt used along with a mold to gather up woodpulp from a vat for pressing and drying into sheets. It helps to control the size of the paper produced. Paper with a feathered or soft edge is often said to have a "deckled" edge for this reason (as opposed to a cut edge).

And we finish at the OED, where the origin of the word appears to be related to the German decke for cover.

Taking a quick peek at my bookshelves, I found several of my hardback Agatha Christies and John Dickson Carrs and some sci-fi hardbacks with deckle-edge pages, and not just from Knopf.  Also Dodd, Mead and Random House; it appears to be an infrequent design element.

p.s. - no more blogging today.  We've had a record-setting snowfall in the past 24 hours (most in over 100 years), requiring some snowblowing of the driveway and shoveling of the walks and decks, and raking of the roof.  Back tomorrow...