"All this money magically appears from nowhere" 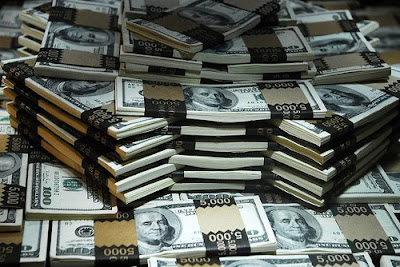 The Washington Post is reporting today that millions of dollars are leaving Afghanistan, and American officials have no idea about the source of the money.


But at a time when the United States and its allies are spending billions of dollars to prop up the fragile government of President Hamid Karzai, the volume of the outflow has stirred concerns that funds have been diverted from aid. The U.S. Drug Enforcement Administration, for its part, is trying to figure out whether some of the money comes from Afghanistan's thriving opium trade. And officials in neighboring Pakistan think that at least some of the cash leaving Kabul has been smuggled overland from Pakistan.

"All this money magically appears from nowhere," said a U.S. official...

The total volume of departing cash is almost certainly much higher than the declared amount. A Chinese man, for instance, was arrested recently at the Kabul airport carrying 800,000 undeclared euros (about $1.1 million).

Cash also can be moved easily through a VIP section at the airport, from which Afghan officials generally leave without being searched... One U.S. official said he had been told by a senior Dubai police officer that an Afghan diplomat flew into the emirate's airport last year with more than $2 million worth of euros in undeclared cash...

The cash flown out of Kabul includes a wide range of foreign currencies. Most is in U.S. dollars, euros and -- to the bafflement of officials -- Saudi Arabian riyals, a currency not widely used in Afghanistan.

General Smedley Darlington Butler would not be surprised.