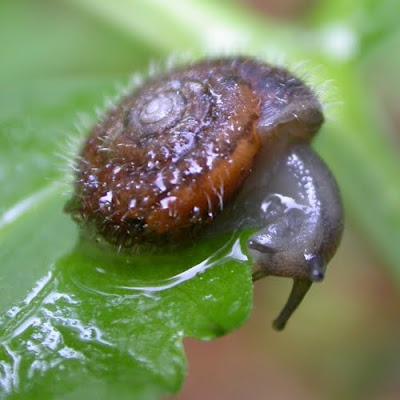 Despite living 6+ decades with a reasonably inquisitive mind, I never knew (or imagined) until this morning that some snails have hair on their shells.


The hairs grow out of the periostracum, the thin skin-like layer that covers the outside of the shell. There are several species of land snails that have similar hairy shells...

What are the hairs for?

To answer that question, Pfenninger et al. (2005) studied the members of the European land snail genus Trochulus. Their analyses show that the habitats of the Trochulus species with hairy shells tend to be wetter than those of the species with hairless shells. They also did some tests that showed that on a wet leaf surface a larger minimum force was necessary to move hairy shells than hairless shells. So they speculate that the hairs help the snails stick to wet surfaces such as the leaves of plants that they apparently climb when they are feeding...

More discussion at the Snail's Tails link re the hairs as a potential antipredation devices.