How lions get killed 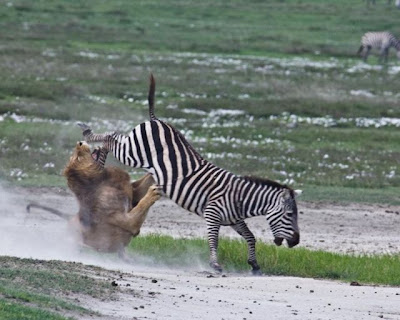 There are just a few mammals intrinsically more powerful than a full-grown lion, so I remember being startled many years ago to see a video of a lion being "killed" by a gazelle (or an impala or a springbok or one of those slender antelope).

The video showed a lioness in pursuit of her prey, and the latter interrupted its flight with occasional kicks backward of the hind hooves.  One such maneuver caught the lion in the face.  The film then cut to show the lioness lying in the grass, looking fine, but the voiceover reported that she had incurred a fractured jaw and unable to eat, would die of starvation.

I was reminded of that today when I saw this photo at Izismile (original source uncredited), showing the much more powerful zebra lashing out with its hooves.  It's a sobering reminder that in any ecosystem even the most obvious "prey" has hidden strengths, and even a top predator can succumb to a "trivial" injury.