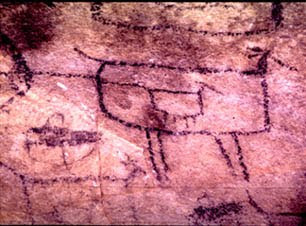 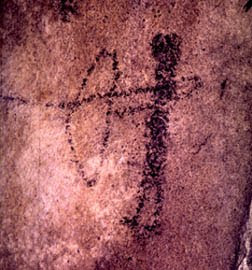 It will surprise some people to learn that there are rock art sites in Wisconsin, a state not noted for prehistoric sites.  But there are caves and rockshelters, some of which are decorated with incised or painted figures.  UW Lacrosse has a webpage listing eight such sites with illustrations.  The images above are from a ninth site - Tainter Cave.


The walls and ceiling contain nearly 100 charcoal drawings of birds, humans, and deer. Many are beyond natural light in the dark zone of the cave, and birch bark torches were found on the floor along with a hide moccasin.”

The paintings portray a whole new style of art. Some panels depict recognizable actions such as a group of bow hunters taking several deer, including pregnant does, in the late winter. This panel is directly beneath a group of birds, bird feet, and feathers representing a classic example of Native American separation of earth and sky. Another appears to represent an infant bound within a cradle board.

These drawings are not as artistic (to the modern eye) as the ones at Lascaux, or the spectacular ones at Chauvet, and will never be as famous as the ones in the Cave of Swimmers, but they served an important ritual or instructional purpose in their time.  It's sad that sites like these have to be sealed with iron gates to prevent modern cretins from vandalizing them.