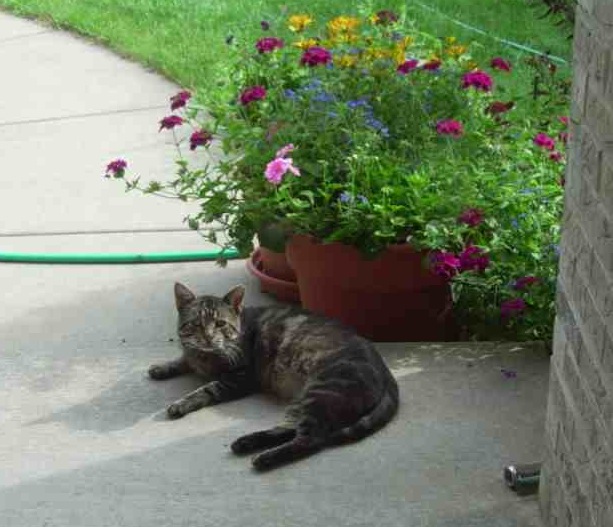 He appeared on our front doorstep on a late summer day in 2008, probably sensing that there were other cats inside our home.  He had that "can-you-spare-a-bite-of-food-for-someone-who's-had-a-rough-life" expression on his face, but he appeared to be quite vigorously healthy - a large-bodied, powerful male with sleek, well-groomed fur.  He was, however, clearly feral, and not a stray.

Some homeless cats are "strays" - house-raised but subsequently abandoned when their family moves to a location that doesn't accept pets or is foreclosed out of their home.  In such situations, families often dump their pets in the suburbs or near farms where they tell themselves the cat can "fend for itself" (typically not likely for a house-reared pet).  Our home sits on the edge of a city, with cornfields next to the cul-de-sac at the end of the street, so we encounter stray cats (as well as foxes, turkeys, possum, and a variety of other wildlife).  Strays may be shy, but typically respond to a "here, kitty, kitty" call and can typically be redomesticated.

Feral cats are born outside of a human enviroment and thus have more primitive survival instincts and poor "social skills" in terms of interacting with people.  Based either on instinct or on previous bad experience they will flee from people.  They are at risk for a variety of ailments, including feline immunodeficiency virus, feline leukemia virus, and parasites.  We have taken several into our home, but it can be a real challenge if they are older than a small kitten.

We offered this fellow some food and fresh water, and he paid us regular visits through that autumn and subsequent winter, slogging through deep snow and then returning to some hidey-hole for shelter.   It was not until the spring of 2009 that we were able to successfully trap him to get him some veterinary care.  Lab tests at the vets showed that he was FIV+, precluding our adopting him, so we had him neutered and released him.

We thought he might not trust us enough to return, but after an interval he resumed his weekly visits.  Perhaps he had a round of sites to visit, or perhaps his refuge was so many miles away that he could only manage a return at that infrequent interval.

As last summer progressed, it was evident that his health was deteriorating.  The photo above, taken in late summer, shows him leaner and a bit less well-groomed.  By autumn he was clearly cachectic, and with another winter approaching, we decided another vet visit was necessary.  In October we trapped him again, and this time the vet found a large abdominal mass - a lymphoma - one of the expected sequelae of untreated FIV.  He had been anaesthetized for the exam that revealed the lymphoma, so we deemed it most humane to euthanize him while anesthetized.

We buried him in a sunny spot at the edge of the woods behind our home.  A cat that had been large and robust in his prime years now folded into a surprisingly small pillbug shape in the grave.  We put hyacinth bulbs around the body, then a layer of crocus bulbs near the surface, and finally sprinkled some catnip seed on the surface.  The large stone was placed, not as a memorial marker, but as a temporary and practical deterrent to predation by scavengers.

We've had a foot of snow on the ground for the last two months, but in a few weeks the melting will begin, and as the ground warms the new spring growth will be most welcome after a long, cold winter.  We don't "mourn" an expected death, but as the flowers emerge we will be pleasantly reminded of visits from a feral cat. 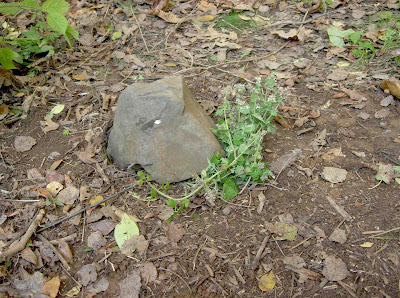