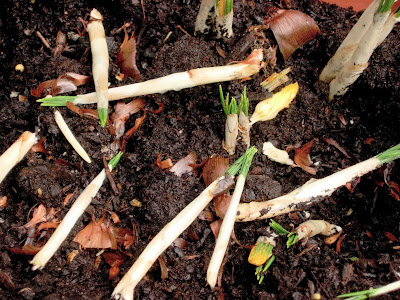 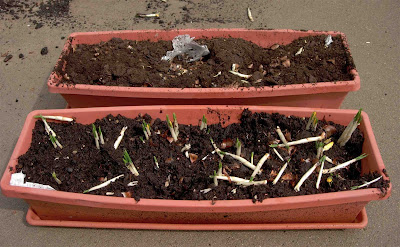 For about a week we had noted minor digging and predation of new sprouts of crocuses in some of our planters. It seemed early for rabbits to be active, so we suspected squirrels. Today we went outside to be greeted by a scene of near-total destruction - and the vandal was caught in the act.

The photos above show the cratering that developed when the little bugger dug down to get the edible bulbs. He/she has nipped off and ignored the stems and even the nascent flowers, scraped a few layers off the bulbs and presumably carried them off to a burrow in the rock wall.

The culprit? The Eastern Chipmunk, Tamias striatus*. I'm not sure how to circumvent this - presumably we'll have to put wire mesh above the bulbs when we plant them. Does anyone know whether sprinkling the planters with used cat litter would deter the chipmunks? We certainly have a superabundance of the material. And it worked when I stuffed it down a mole's hole once.


* Tamias is Greek for "storer," a reference to the animals' habit of collecting and storing food for winter use…

The common name originally may have been spelled "chitmunk" (c.f. Ojibwe, ajidamoo). However, the earliest form cited in the Oxford English Dictionary (from 1842) is "chipmonk". Other early forms include "chipmuck" and "chipminck", and in the 1830s they were also referred to as "chip squirrels," possibly in reference to the sound they make...

[they] are an important vector for dispersal of the spores of subterranean sporocarps (truffles) which have co-evolved with these and other mycophagous mammals and thus lost the ability to disperse their spores through the air. [now that is fascinating]