The Shores of the Cosmic Ocean 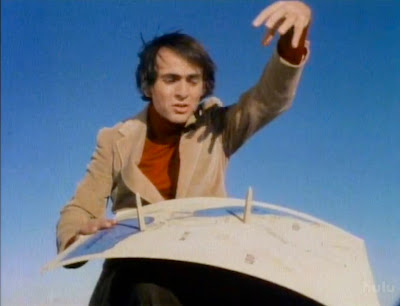 I discovered yesterday that the entire 13-episode series of Cosmos: A Personal Voyage is now available for viewing on Hulu - fullscreen, high-definition, and free.* Last night I watched the first episode - The Shores of the Cosmic Ocean - for the first time in almost 30 years.

It's hard to explain the immense impact that the Cosmos series had on a young(er) and still impressionable mind way back in 1980. The visual special effects were (for the time) awesome; not so much the "spaceship" of the voyage, but in the first episode the recreation of the Library of Alexandria in apparent 3-dimensional space which Carl Sagan then walks through as he speaks.

Then there was the music. The theme is Heaven and Hell, created by Vangelis and featured in the YouTube segment embedded at the top. This was synthesized music that some of us had previously heard on the Hearts of Space radio series, from a composer who would then go on to create the scores for Chariots of Fire and Blade Runner.

But the greatest impact was from the content. Cosmos is remembered (and parodied) for Sagan's use of "billions and billions" to describe the universe, but the numbers really are staggering - even today after decades of exposure to huge numbers during our space programs (and our budgetary problems). Some samples from this first episode:

our galaxy has about 400 billion suns.

in the Hercules Cluster, individual galaxies are 300,000 light-years apart.

some stars are 100 trillion times as dense as lead.

there are a hundred billion galaxies and a billion trillion stars.

It's almost impossible to wrap one's mind around such quantities, so I'm even more fascinated by some of the "terrestrial" revelations: In the screencap I took and embedded above, Sagan is explaining how, in about 200 B.C., Eratosthenes calculated the circumference of the earth to within 1% of its actual value, by noting the difference of shadow lengths at the summer solstice.

Eratosthenes was the librarian at the Library of Alexandria, which housed the greatest accumulation of wisdom the world had ever assembled in one place. One of the books in the library was a 3-volume history of the world written by the Babylonian Berossus. Volume 1 covered the time period from the earliest known time until the Great Flood - a length of time he calculated as 432,000 years - 100X the length of time recorded by Biblical sources. Imagine what information that book would have included.

I plan to view several more of those Cosmos episodes to see if I can get back that sense of wonder that seems to be blunted by all the mundane developments and concerns of our day-to-day world.


*When I referenced Hulu as the resource for the Jon Stewart/CNBC confrontation, I received a polite but firm reprimand noting that Hulu does not stream outside the U.S.:

"I'm from Australia originally and I'm impressed with your general openness towards other countries - but sometimes (you are by no means the worst offender - many many many other blogs are far worse) you seem to ignore the fact that other countries exist. I really enjoy your blog, but please make sure that your content is accessible to everyone."

The reflex response would be that TYWKIWDBI is viewed by visitors from 180 countries and there's no way that I can know what is blocked where, and I would normally rely on the inventiveness of the audience to circumvent local problems (noting that this blog gets 150 hits/month from within the PRC, which has a national firewall to block access to blogspot blogs).

But frankly I hadn't realized that Hulu limited its streaming, and if it affects both Australia and Canada - two of the largest sources of my non-U.S. traffic - then I should in fact offer some accommodation. Here is Cosmos' official website. And here are the YouTube offerings of Cosmos episodes. In the future I'll try to remember to post YouTube alongside Hulu, but if (when) I forget, someone should feel free to post such info in the Comments section.