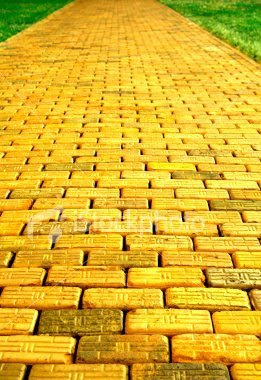 ... all tied together by The Yellow Brick Road.

A BBC article this week revisits the controversy as to whether the Wizard of Oz has an underlying message about politics and economic theory.

Baum published the book in 1900, just after the US emerged from a period of deflation and depression. Prices had fallen by about 22% over the previous 16 years, causing huge debt.

Farmers were among those badly affected, and the Populist political party was set up to represent their interests and those of industrial labourers.

The US was then operating on the gold standard - a monetary system which valued the dollar according to the quantity of gold. The Populists wanted silver, along with gold, to be used for money. This would have increased the US money supply, raised price levels and reduced farmers' debt burdens...

"The Tin Woodman represents the industrial worker, the Scarecrow is the farmer and the Cowardly Lion is William Jennings Bryan."

...In this scenario, the yellow brick road symbolises the gold standard, the Emerald City becomes Washington DC and the Great Wizard characterises the president - and he is exposed as being less than truthful.

And what about the US's geographical divisions: the Bad Witches are of the East and West; the Good, from the North and South. For East read banks and railroads; for West, read gold dealers and more railroads; for North, read the heart of the Populist movement; for South, the agrarian region most harmed by the depression.

There is an extensive review of the political interpretations of the Oz books, at Wikipedia, including the Winged Monkeys, who could be viewed as Pinkerton agents working for Trusts, or as Native Americans enslaved by the witch. Dorothy would be an Everyman.

If the Munchkins represent ordinary citizens, their attitude toward work seems a bit odd for a post-depression era; here are some of the lyrics from the Merry Old Land of Oz, sung by the Munchkins:

Which, of course, serves as a segue to the musical aspect of the yellow brick road. Here is the famous ballad written by Bernie Taupin, performed by Elton John (with the assistance of the Muppets):

It's hard to believe that song has been around for over 25 years. And in all those years I never quite understood the lyrics. Always liked them, never understood them:

What do you think you'll do then
I bet that'll shoot down your plane
It'll take you a couple of vodka and tonics
To set you on your feet again
Maybe you'll get a replacement
There's plenty like me to be found
Mongrels who ain't got a penny
Sniffing for tidbits like you on the ground...

Now we finish "Down Under" with the other "Oz" - Australia. I had assumed that "Oz" was a simple linguistic shorthand, but it may be more complex than that:

Some critics have even speculated that Baum was inspired by Australia, in naming the Land of Oz: "In Ozma of Oz (1907) Dorothy gets back to Oz as the result of a storm at sea while she and Uncle Henry are traveling by ship to Australia... Like Australia, Oz is an island continent. Like Australia, Oz has inhabited regions bordering on a great desert. One might almost imagine that Baum intended Oz to be Australia, or perhaps a magical land in the center of the great Australian desert."