Who are the world's most influential people? 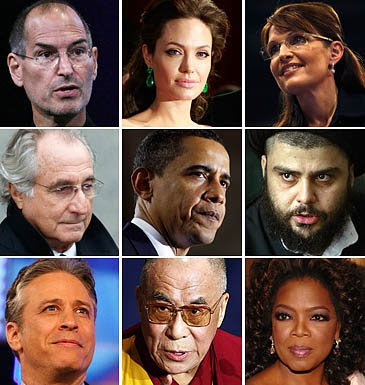 Time Magazine wants you to vote.

As I write this, the leading vote recipient is "moot," the founder of 4chan, one of the most innovative, influential, and profitable sites on the web. #2 is Rain, a Korean pop star. Apparently not resting on his laurels after having a room on the Space Station named after him, Stephen Colbert is in the 5th spot, with Jon Stewart just ahead of him in 4th.

Obama? 14th - well behind Morgan Tsvangirai and the Dalai Lama. George Bush is just ahead of Tina Fey. Sarah Palin is neck-and-neck with Bill O'Reilly and Jim Cramer.