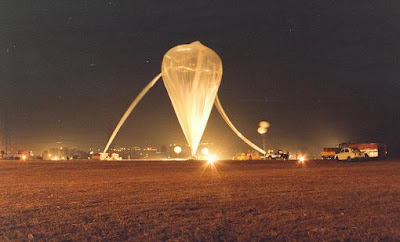 Three new species of bacteria, which are not found on Earth and which are highly resistant to ultra-violet radiation, have been discovered in the upper stratosphere by Indian scientists...

The experiment was conducted using a 26.7 million cubic feet balloon carrying a 459 kg scientific payload soaked in 38 kg of liquid neon, which was flown from the National Balloon Facility in Hyderabad...

In all, 12 bacterial and six fungal colonies were detected, nine of which, based on 16S RNA gene sequence, showed greater than 98% similarity with reported known species on Earth. Three bacterial colonies, namely, PVAS-1, B3 W22 and B8 W22 were, however, totally new species. All the three newly identified species had significantly higher UV resistance compared to their nearest phylogenetic neighbours.

Before blogging this, I checked with a family member who does extremophile research in California. Although the press release describes the organisms as ones "not found on Earth," what is meant is that these are ones not previously found here. It does not imply that these bacteria and fungi came from outer space (although such might be possible).

The likelihood is that they started on land or in the ocean and were wafted to the stratosphere by convective means after being launched from explosions, waves breaking, etc. Their high UV resistance is probably a result of selection pressure and allows them to persist in that environment.

The broad diversity of capabilities of extremophiles never ceases to amaze me.