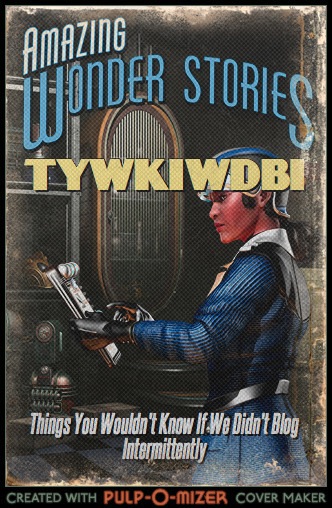 Just a reminder that things I post in a linkdump should not be viewed as less worthy of attention than material getting a full post.  It's a mixture of things of interest only to a limited audience, or items with no pictures, or things so popular they aren't "TYWK", or stuff I want to store for perusing in detail or linking to later.  But mostly a linkdump allows me to get away from the computer.  Today to crank up the snowblower again, sadly...

The sum of all the numbers on a roulette wheel is 666.

If you're opposed to Citizens United but don't know what to do about it, you could start by signing Al Franken's petition to call for a Constitutional amendment to overturn it.

If "Planet of the Apes" had been made in Minnesota.

The "Wind Map" depicts a live representation of wind direction and velocity in the United States.  It's beautiful because it's in constant motion, and I wish I could embed it, but here's a screencap: 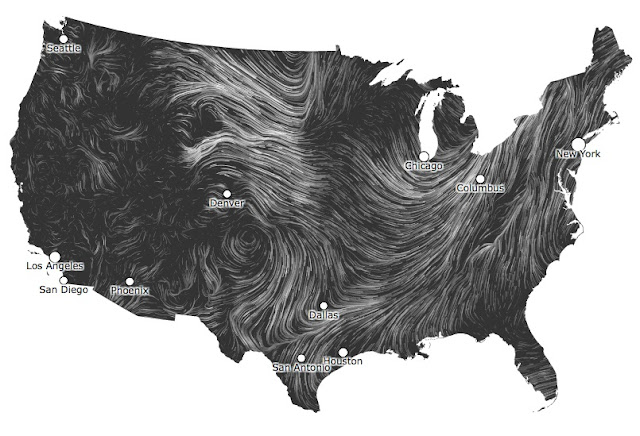 If you own or live in a house, you should read (or bookmark) this column about water shut-off valves.  You may need to acceess yours in a hurry some day.

"Republican U.S. Rep. Scott DesJarlais, who opposes abortion rights, mutually agreed with wife to abort not once but twice."

The mysterious "bloop sound" that was once attributed to whales or unknown marine life, has now been ascribed to "icequakes."

A Wall Street Journal article explains how to make money selling mud as a beauty treatment.

Bdelliod rotifers have gone 80 million years without sex (longer than you), but still have managed to evolve into 400 species.

A brief history of breakfast, lunch, and dinner.

Someone is shooting and mutilating dolphins in the Gulf of Mexico.

Everyone knows how wait staff in a restaurant can get back at you if you mistreat them.  Here is an discussion of what can happen if you are not nice to a hotel clerk.

The former editor of the OED "covertly deleted thousands of words because of their foreign origins and bizarrely blamed previous editors."

Godchecker is a website where you can look up information on 3,000 gods, including the one you believe in.

Are you Irish-Canadian or know someone who is?  Then you should bookmark "The Shamrock and the Maple Leaf, an exhibition of Irish-Canadian documentary heritage held by Library and Archives Canada. Here you will discover photographs, letters, books, music and other evidence of Ireland's vital influence on Canadian history and culture."

In 2005 "an Australian man built up so much static electricity in his clothes as he walked that he burned carpets, melted plastic and sparked a mass evacuation. Frank Clewer, of the western Victorian city of Warrnambool, was wearing a synthetic nylon jacket and a woollen shirt when he went for a job interview. As he walked into the building, the carpet ignited from the 40,000 volts of static electricity that had built up." [note: the veracity of this story has been questioned].

The director of renal transplantation at the University of Minnesota argues that people should be allowed to sell one of their kidneys.

Beer consumed in ancient Nubia contained a potent antibiotic (tetracycline), from contamination of the grain used in brewing the beer.

The marked answers on "bubble forms" on standardized tests can be analyzed "to catch students who hire proxies to take their SATs and teachers who change answers on their students’ high-stakes tests."  More on the subject here.

"Prison officials in the US state of Texas have abolished the traditional last meal request for inmates who are facing execution. The move came after a prisoner requested a huge meal then did not eat any of it, saying he was not hungry."

Bionic eye implants may offer progress in treating some forms of blindness.


For around $115,000, you get a 4-hour operation to install an antenna behind your eye, and a special pair of camera-equipped glasses that send signals to the antenna. The antenna is wired into your retina with around 60 electrodes, creating the equivalent of a 60-pixel display for your brain to interpret. The first users of the Argus II bionic eye report that they can see rough shapes and track the movement of objects, and slowly read large writing. The second bionic eye implant, the Bio-Retina developed by Nano Retina, is a whole lot more exciting. The Bio-Retina costs less — around the $60,000 mark — and instead of an external camera, the vision-restoring sensor is actually placed inside the eye, on top of the retina. The operation only takes 30 minutes and can be performed under local anesthetic.

All Zappo's employees can fly free on the company's private jets.

To better control prostitution, Zurich plans to approve "drive-in sex boxes." "The prostitutes who use the sex boxes will also have to take out medical insurance and buy a £26 licence in order to ply their trade. On top of that they will also have to feed five Swiss francs, about £3.30, into a roadside ticket machine each night when they clock on."

A new fish has been named after Barack Obama.  "Etheostoma Obama, is a relatively skinny orange and blue speckled fish topped by a brilliant fan-shaped fin, with bold orange stripes."

How to make "surprise balls" (a cool way to wrap up small gifts).

"An Eagle Mills, New York couple that lost their home to a fire last week, now has to pay $1,400 for the water used to combat the flames."

Some people claim to have become physically ill while watching the new Hobbit movie because of the unusual high-speed cinematography technique employed.

A Walk in the WorDs posted a list of linkdumps/linkfests.  By linking to his post, I'm promoting the process of "recursion."

A potentially rather valuable discussion thread at Reddit addresses the question "What is something you think everyone should have installed on their computer or laptop?"

Ever wanted to see the inside of a gold bullion vault?

It's now possible to search 15 years of the New York Times crossword puzzles, both for clues, and for their answers.  "Blog" for example, has been clued as a "post holder."

Helpful information for homeowners on how to prevent ice dams.

Impessive video: "After weeks of waiting, the filmakers witnessed 7.4 cubic km of ice crashing off the Ilulissat glacier in Greenland."  Related: watching meltwater rushing down a moulin.

"City buses across America increasingly have hidden microphones that track and record the conversations that take place on them..."

You can use Google Maps to look up mass animal deaths.

Historic photos from Cathedral Grove show how massive trees grew before humans arrived with saws. " Father's hollow trunk was so large that a person could walk erect inside it for 200 ft."

A possible answer to the D-Day pigeon riddle.

It's fairly commonplace to encounter videos of people solving scrambled Rubik's cubes blindfolder.  Here's one of a man solving an 8x8x8 Rubik's cube blindfolded.  The video is compressed from over an hour (about half of that study time) to show the entire process in about 7 minutes.

An article about flesh-eating beetles (dermestid beetles), with a video of their use in the laboratory.

"Brian Krebs reports on a terrifyingly real-seeming Point of Sale skimmer: a device that looks and feels just the thing you normally stick your credit-card into and then enter your pin into, which can print out a real-seeming receipt showing the transaction was approved by your bank. Instead, what this thing does is record your card number, PIN, and other information needed to replicate your card and use it to clean out your account."

A good (and presumably accurate) video explaining some misunderstandings in the public's understanding of the meaning of the terms "semi-automatic weapons" and "assault rifles."

How high can a tiger jump?  This high.

I enjoyed creating the embed image at the top, using the Pulp-O-Mizer, via Neatorama.

Enough for the day.  I'll close with this photo (cropped from the original), entitled "My mom told me that our new power strip wasn't working... Came to find this...": 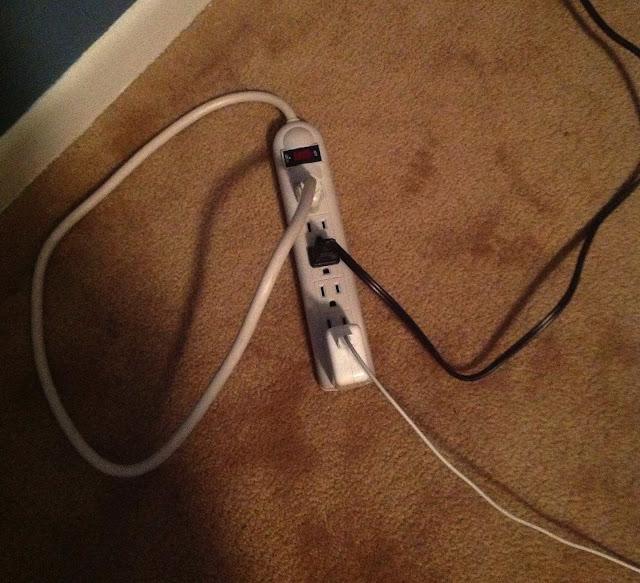