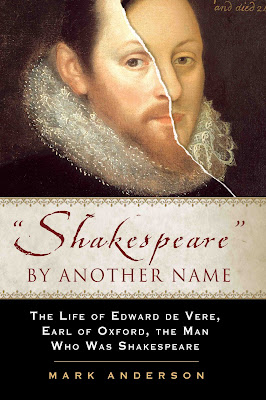 One of my Christmas gifts this year was the book shown above, about the Shakespeare-Oxford connection. I'll review it later this winter, but by coincidence I encountered a nice post this week at A Polar Bear's Tale which featured five paintings of seventeenth-century ladies wearing similar collars, including this "Portrait of a Woman" (1628) by Michiel Jansz van Miereveldt: 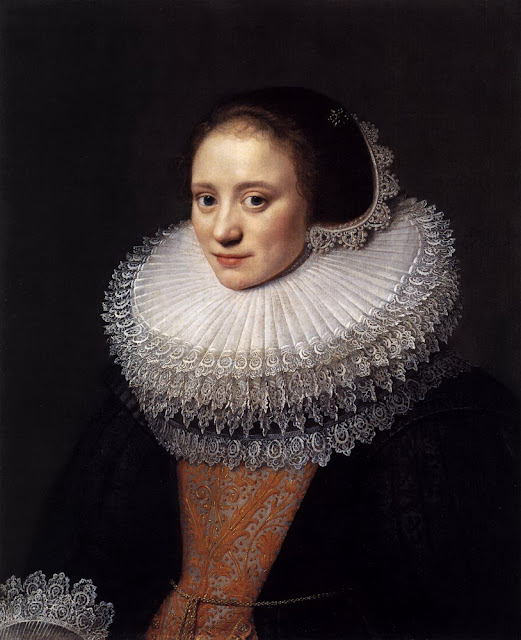 Was there any practical purpose for such an elaborate collar?  Inquiring minds want to know.  First stop: Wikipedia -


The ruff which was worn by men, women and children, evolved from the small fabric ruffle at the drawstring neck of the shirt or chemise. They served as changeable pieces of cloth that could themselves be laundered while keeping the wearer's doublet from becoming soiled at the neckline.

The discovery of starch allowed ruffs to be made wider without losing their shape. Later ruffs were separate garments that could be washed, starched, and set into elaborate figure-of-eight folds by the use of heated cone-shaped goffering irons. Ruffs were often coloured during starching, vegetable dyes were used to give the ruff a yellow, pink or mauve tint. A pale blue colour could also be obtained via the use of smalt, though for an unknown reason Elizabeth I took against this colour and issued a Royal Prerogative "Her Majesty's pleasure is that no blue starch shall be used or worn by any of her Majesty's subjects."

At their most extreme, ruffs were a foot or more wide; these cartwheel ruffs... required a wire frame called a supportasse or underpropper to hold them at the fashionable angle...

I suppose in an era when washing-up was not very meticulous, the removable collar did protect other clothing from stains.  For "goffering irons" I had to retreat to the OED: to flute or crimp, from the French gaufrer "to stamp figures on cloth."  And "smalt" is also of French derivation (ultimately related to the smelting of ores), and refers to a deep blue glass colored by cobalt oxides.

For those interested, the starching process is explained in detail, with pix, at Elizabethan Costume.  Detailed instructions on how to actually make the ruff are explained here.

"The ruffs, or collars, framed the face and dictated the hairstyles of the age which were generally short for men and swept up look was required for women."