The proposed federal budget for 2011

There is a wonderful interactive graphic today at the New York Times, displaying Obama's proposed budget.   The embed above is hard to read and static.  At the link you can mouse over the categories, zoom in to see details, and compare the figures for 2010 with those for the coming year.

The next time you're at a cocktail party or at the office water cooler, ask someone where the federal budget should be cut.  Typical answers would include "art projects," "research on fruitflies," "exploring Mars," "public housing," etc.  Those are all in the little boxes.  The very little boxes.

If you look at the figure above, the top center box is Medicare, which by law can't be cut.  The bottom left box is Social Security, which also can't be cut.  There are also other areas that are off-limits to even the most dedicated budget cutter.  So, the NTY offers a second graphic with those areas whited out: 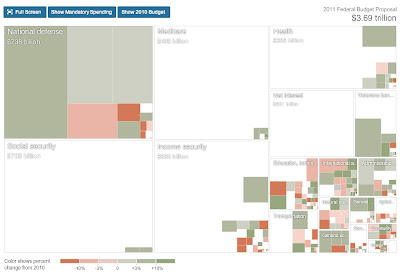 Now - you want to cut federal spending.  Pick a box to work on.   Any box.  See where you can make a meaningful cut...