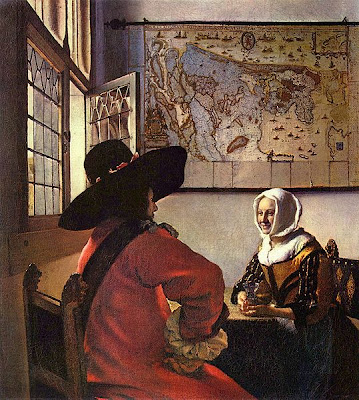 I think it was about a year ago that I encountered a fascinating article at Grand Illusions which discussed the possibility that Vermeer used a camera obscura in the creation of some of his masterpieces. This is the Hockney-Falco thesis, discussed at Wiki, and at the Grand Illusions link.

The painting embedded top above is Vermeer's "Soldier and the Laughing Girl."

Pennell referred to the 'photographic perspective' of pictures such as this one, where the figure of the soldier, in the foreground, is disproportionately large. We think nothing of this shot today, the perspective is quite correct for the 'close up' viewpoint, just the sort of picture you might take with a camera. But for a 17th century painting, this perspective would have seemed unusual, even brutal.

Much more discussion at the link, and also this curious observation:

In the old church in Delft, when you look up the baptismal records for the year 1632, you find Vermeer's name. But on the same page of the records, born within a few months of Vermeer, there is another name, Anton van Leeuwenhoek, the microscopist...

At around this same time Vermeer stops painting the religious paintings that he began his career with, and starts producing the exquisite interiors that he has become famous for, with the aid of a lens. Did he get the lens from Leeuwenhoek?

With that as a tantalizing background, today I found a report in the Telegraph discussing the Caravaggio's use of a camera obscura and other "cutting edge" technology:

Art history scholars have long known that Caravaggio worked in a sort of darkroom, illuminating his subjects through a hole in the ceiling and projecting the image onto a canvas using a lens and a mirror.

But Mrs Lapucci is the first researcher to suggest that he treated the canvas with light-sensitive substances, including a luminescent powder made from crushed fireflies, in order to "fix" the image as 19th century photographers later would...

An "abnormal number" of Caravaggio's subjects are left-handed. "That could be explained by the fact that the image projected on the canvas was backwards..."

[H]is protector, Cardinal Del Monte, was also the protector of Galileo, and they were all fascinated by optics and the new physics."

The Caravaggio canvas image embedded above is "Judith beheading Holofernes." More on that when I gather some more beheading links.