Some Thoughts about Comments on blogs 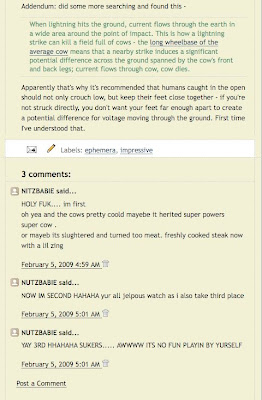 For some blogs and non-blog websites, comment threads can be more valuable (and more entertaining) than the post itself. The best examples I know of are the threads at Reddit, where one finds everything from amazingly detailed knowledge to absurdly crude juvenile behavior; almost invariably the thread is as useful as the primary link.

For “top tier” (“top 1000”) blogs and websites like Neatorama, Presurfer, J-Walk, and Boing-Boing, a virtual community develops, especially when commenters identify themselves, and the threads become useful in and of themselves.

For small blogs like TYWKIWDBI (a “top 100,000 blog”), comments are – shall we say – a “mixed blessing.” At their best, they enhance the post; at their worst they are a wasteful distraction. When I set up this site a little over a year ago, I decided to allow unrestricted comments and anonymity for commenters, and now it’s time to ponder the result.

Based on my brief and obviously unprofessional 14-month experience, here are, in no particular order, the “categories” of comments I’ve encountered. Other bloggers may wish to add additional ones to the comment thread below (!), and I may incorporate those suggestions if/when I update this post in the future.

A) Comments that enhance, clarify, or correct
From a blogger’s viewpoint, this is the pinnacle of comment authorship – an entry that adds useful information, or even better, corrects a misstatement by me in the original post.

Now that TYWKIWDBI has a decent following, I sometimes post items specifically seeking assistance. One recent example was the “cat food fungus.” I discovered it last winter, but traffic at the blog was 30 hits/day, so there wasn’t much point in seeking an answer. Last month, with 2000 people/day stopping in, I decided to give it a try – and literally within hours “kentyman” provided the identification and a link.

Another example was the Tatev monastery. What I posted was an intriguing photo that I had found on a pictureblog without obvious identification re location. Again, literally within hours, Rich H identified it as Tatev and provided a link; armed with that info I was able to research Tatev further and write a much better followup post.

There have been dozens of other examples. I am recurrently amazed at the breadth and depth of knowledge displayed by surfers of the ‘net. I believe because TYWKIWDBI is an “aggregator” blog with a broad spectrum of entries that it draws readers who have similarly broad ranges of knowledge. Some may be true polymaths, others specialists in their own narrow field. It is frankly fun to tap into these resources. I’ll do more “what is this” items in the future, not as competition or for bragging rights, but just to make use of the collective knowledge of visitors here.

B) Handclaps from appreciative readers
These are the brief-and-to-the-point kudos: “Fantastic” “Awesome” “Really enjoyed that.” “Haven’t seen that before.” “I saw something kind of like that maybe in North Dakota can’t remember.”

In terms of actual factual content, they add nothing useful to other readers; they do, of course, indicate to the blogger that the post was of interest to someone. These are the cyberequivalent of a tip to the bartender for good service.

C1) The “loyal opposition” begs to differ
I try to blog “from the center.” That’s my own sociopolitical position, and it’s where I would like to keep the blog. It allows me to excoriate politicians on both sides of the aisle, religious extremists of all faiths (but not religious moderates of any faith), and social misfits, celebrities, Luddites, wacko conspiracy theorists, and other inhabitants of the fringe.

The “loyal opposition” I refer to in this category are those who disagree and do so respectfully. When such opposition is expressed well, it actively enhances the blog. I blog things I’m no expert on and there are often aspects I haven’t considered. Especially for items in the “rant” and “WTF” categories, I welcome alternative views if they are expressed coherently and logically.

The “loyal opposition” on many boards (not so much here yet) is perhaps best exemplified by the young earth creationists who will write something to the effect of “You’re wrong. I know you’re wrong because the Bible says you’re wrong. You’re at risk for burning in Hell for eternity. Have a nice day.”

Unfortunately TYWKIWDBI is not an ideal venue for true dialogue because I blog 10-12 things/day, so items move down the column quickly and soon disappear to page two. Sustained comment threads and “comments on comments” are infrequent (although it does look like 9/11 conspiracy theory may be an exception worth exploring again in the future). Which brings us to category C2.

C2) The “vehement opposition”
When one ventures away from blogging science, history, art etc, and into the fields of politics and religion, one encounters opposition that may be much more forceful.

Interestingly, blogging from the center definitely does not mean pleasing everyone. It does mean that I can simultaneously offend people from all fringes at the same time. At least for politics, social issues, gender issues, and religion, the wingnuts in right field and left field do not appreciate even a modicum of dissention from their received wisdom. The “you’re either with us or against us” philosophy doesn’t embrace centrists.

There’s nothing “wrong” with being vehemently opposed. Typing a comment in ALLCAPS is the cyberequivalent of shouting. The vast majority of people consider it impolite, but it happens…

C3) “The Fringe” wishes you were dead
Not much of that here, at least so far. I won’t delete the ravings of knuckle-dragging madmen unless they are also filled with profanity, anti-Semitism, racism, homophobia etc. The category is self-explanatory.

D) Profanity.
Self-explanatory. As with profanity in the everyday world, it often comes from people who simply don’t have a vocabulary that allows them to express superlatives or vehemence in any other fashion.

TYWKIWDBI is also read by people in 180+ countries, so sometimes profanity may be the only resort for a person for whom English is a second language. Unfortunately (but understandably) I can’t edit comments; I try to judge such comments on an individual basis.

E) Mindless spacefiller.
Different from the “handclaps” in category B, these comments are also brief (typically acronymically shortened), but seem to be written not to commend the blogger, but to draw attention to the writer.

The best example of mindless spacefiller on TYWKIWDBI so far are the comments in the image embedded above; they appeared in response to my discussion of why lightning follows the path it does through a cow.

Other examples in this category are LOL and ROFLMAO. It’s not the acronym itself that is mindless spacefiller - it’s the freestanding acronym without further explanation. Yes, it was a funny video; that’s why I posted it. You’re telling me you’re laughing. Why?

YouTube commentary is riddled with such drivel – pages and pages of it. I sometimes scroll through YouTube comments looking for info about a video, but there’s only so much a well-ordered mind can take. Better to seek the video on Reddit and look for commentary there.

F) Please feed me with a spoon, Mommy
From high school to college to graduate school, a recurrent theme from instructors and professors is “I’m not going to spoon-feed you.” What they are saying is “look it up yourself” or “figure it out – you’ll remember it better that way.”

If I post something about butterfly farming and mention a chrysalis, someone may write in the comments “What’s a chrysalis? Is it like a cocoon?” Google/Wiki, for crying out loud. You’re sitting in front of the most powerful information-retrieval system in the history of mankind. The Library of Alexandria pales in comparison to the resources of the web, and you want me to spoon-feed you info you could find by typing eight letters and hitting “Return.” Get with the program.

G) Spam
Snake. There, I’ve said it. I cannot write anything about snakes without receiving a comment to the effect “Wonderful post, interesting blog. If you want to buy some snake oil, go to…” These are obviously generated by a “bot” that cruises blogspot looking for keywords, and unfortunately these comments even reappear after deletion, because there’s no mechanism to “ban” an author. When you see “comment deleted” on a TYWKIWDBI comment thread, it’s almost always for this reason.

H) The Troll emerges from under the bridge…
Beyond the “loyal opposition” of C1, and the “vehement opposition” and even the “fringe” is the true troll. Mythical trolls lived under bridges or in the forest and confronted wayfarers with impossible demands or veiled threats. Cyberworld trolls step onto a comment thread with an entry designed specifically and emphatically to offend the blogger and other readers.

For example, a video of cute kittens might prompt a troll to write “kittens should be roasted in a microwave.” That’s not an opposition or fringe comment; it’s not an argument for a viewpoint – it’s just a deliberate attempt to offend. Another format is for trolls to offer sleazy sexual innuendo on nonsexual topics.

This is not the art of the curmudgeon; you’re not reading the prose of Ambrose Bierce or Lewis Lapham. Trolls offend for the sake of offense. They want attention. It may be a reflection of a deep personality defect, or perhaps the effect of ETOH and pharmaceuticals bubbling through a juvenile or immature mind.

There’s little to be gained by “arguing” with a troll. The troll isn’t here for the argument; he/she only wants attention to prop up a life in which they are probably unimportant and no one listens to them. If I delete the comment, they may just take umbrage and pepper other threads with their venom.

“The only argument available with an east wind is to put on your overcoat (Lowell).” I ignore trolls. You should too. Go ahead and argue with a C1 or a C2, maybe even a C3, but when you encounter a troll, just walk away.

I) Captain Obvious
The last category I can think of for now is the iconic “Captain Obvious,” referred to on internet message boards for more than ten years.

That’s enough for now. I can’t believe I’ve rambled on this long. Some of you who have blogged longer than I have may wish to add some other categories or modify the ones I’ve suggested. Perhaps everything I’ve said is already apparent to long-term bloggers. If so, maybe I’m Captain Obvious… [photo below presumably 'shopped, original source unknown] 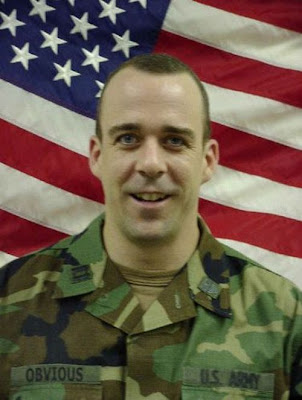