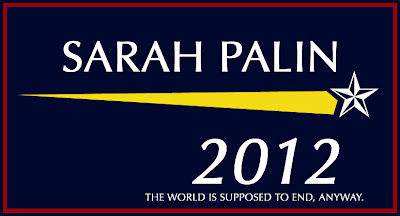 The reference in the image above is to the 2012 Doomsday prediction, based on the Mayan calendar.

A poll released today suggests that based on current opinions, a 2012 Obama/Palin election would be no contest:

Obama leads Palin 55-35 in the hypothetical contest. He has an 89-7 advantage among Democrats. Among Republican he trails 66-17. Last year exit polls showed Obama winning only 9% of the Republican vote, so it appears Palin would lose a lot more voters within her party than McCain did.

It's kind of silly to be doing such polling now; I guess pollsters have to do something to justify their existence.