The invention of the teacup handle 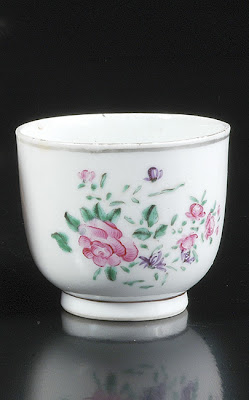 "In 1700, a pound of leaves for which a Chinese peasant was paid one penny sold in European shops for about 3 pounds. By 1800, that price had plummeted 95% to about three shillings, making tea affordable for most citizens. In 1700, only the wealthiest drank tea; at mid-century, most members of the bourgeoisie (including, famously, Dr. Johnson) consumed it regularly; by 1800 it was swilled even in the workhouses...

The East India company more than made up for the drop in price with the rise in volume, which over the eighteenth century rose from fifty tons per year to fifteen thousand...

Because tea was relatively cheap at its source in China, it was served there lukewarm with little aplomb in a handle-less cup. The Japanese, because of its expense, poured it with far greater ceremony and Europeans served it hot so as to quickly dissolve the sugar used to make it palatable to the Western tongue. This custom required a new invention: the cup handle.

The handle-less Chinese cups stacked easily and could be shipped as ballast and sold for a few pence. The handles were added later, and by the mid-eighteenth century, handle makers had become a fixture in most large European cities...