The brief saga of Charles Freeman comes to an end 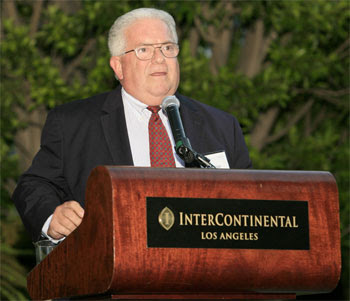 Ambassador Charles W. Freeman Jr. had been proposed by President Obama as the new Chairman of the National Intelligence Council. The NIC coordinates mid- and long-term strategic planning for this country's intelligence community; its stated goal is to provide information "unvarnished, unbiased and without regard to whether the analytic judgments conform to current U.S. policy."

The proposed appointment has been met with considerable controversy, which we have not covered in this blog because it is so well covered at conventional news and opinion sources. Yesterday Ambassador Freeman requested that his nomination be withdrawn. Here are excerpts of his statement, as published in the Wall Street Journal:

Still, I am saddened by what the controversy and the manner in which the public vitriol of those who devoted themselves to sustaining it have revealed about the state of our civil society. It is apparent that we Americans cannot any longer conduct a serious public discussion or exercise independent judgment about matters of great importance to our country as well as to our allies and friends.

The libels on me and their easily traceable email trails show conclusively that there is a powerful lobby determined to prevent any view other than its own from being aired, still less to factor in American understanding of trends and events in the Middle East. The tactics of the Israel Lobby plumb the depths of dishonor and indecency and include character assassination, selective misquotation, the willful distortion of the record, the fabrication of falsehoods, and an utter disregard for the truth. The aim of this Lobby is control of the policy process through the exercise of a veto over the appointment of people who dispute the wisdom of its views, the substitution of political correctness for analysis, and the exclusion of any and all options for decision by Americans and our government other than those that it favors…

I believe that the inability of the American public to discuss, or the government to consider, any option for US policies in the Middle East opposed by the ruling faction in Israeli politics has allowed that faction to adopt and sustain policies that ultimately threaten the existence of the state of Israel. It is not permitted for anyone in the United States to say so. This is not just a tragedy for Israelis and their neighbors in the Middle East; it is doing widening damage to the national security of the United States...

(The charges against Mr. Freeman are summarized here. He denies these charges):

In the court of public opinion, unlike a court of law, one is guilty until proven innocent. The speeches from which quotations have been lifted from their context are available for anyone interested in the truth to read. The injustice of the accusations made against me has been obvious to those with open minds. Those who have sought to impugn my character are uninterested in any rebuttal that I or anyone else might make.

Still, for the record: I have never sought to be paid or accepted payment from any foreign government, including Saudi Arabia or China, for any service, nor have I ever spoken on behalf of a foreign government, its interests, or its policies. I have never lobbied any branch of our government for any cause, foreign or domestic. I am my own man, no one else's, and with my return to private life, I will once again – to my pleasure – serve no master other than myself. I will continue to speak out as I choose on issues of concern to me and other Americans.

Strong words from a brave man. For further insightful analysis of these matters, see Glenn Greenwald's column in today's Slate.