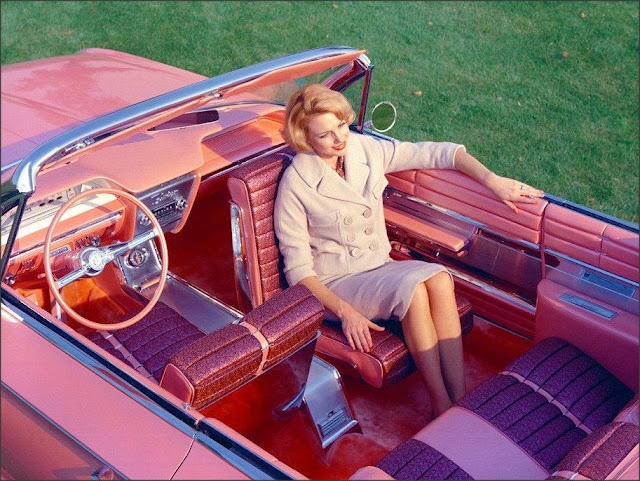 I didn't remember ever having seen this car on the road or in advertisements, so I had to search for information, which I found at Mac's Motor City Garage:


The Flamingo was based on a production Electra 225 convertible, but with several noteworthy modifications, starting with the color: an eye-searing pearlescent pink. Custom paints with trick pigments and toners—pearls, candies, metalflakes—were just coming into use in the custom car world in the early ’60s, but it would be many years before these finishes would be suitable for standard production cars...

The other key attraction of the Flamingo was the its full-house custom interior, which included two-tone upholstery in pink leather and cranberry brocade. A wide console with bright-metal trim ran between the front bucket seats, although the shift lever for the Turbine Drive automatic transmission remained on the steering column. The clock, mounted in the top of the dash on the production Buick, was relocated to the console riser, where it could possibly be mistaken for a tachometer. But the most novel addition was the pivoting passenger seat, which turned 180 degrees to face the rear passenger seats, ostensibly for outdoor entertaining—tailgate parties and such.

In 1961 I was a freshman in high school with a new driver's license, so you can imagine my thoughts on seeing this photo.   And no stick shift between the bucket seats.  Too bad this never went into production.

Photo via Vector's World, a vehicle-centric blog written by a TYWKIWDBI reader whose screen name long antedated the pandemic.