"Night of the Living (brain) Dead" (protesters in Ohio) 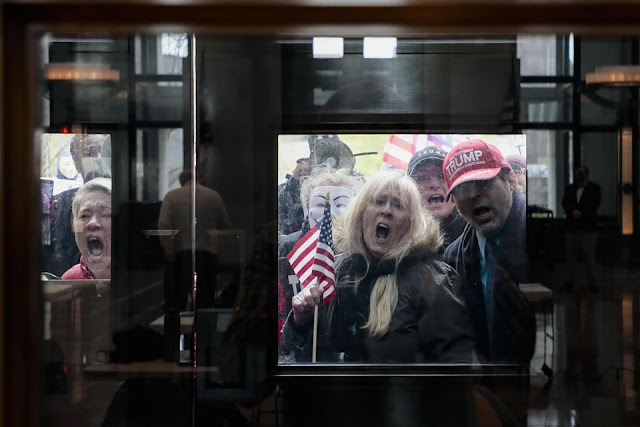 Title adapted from the post at the Pics subreddit (photo credit Joshua Bickel), where I found the following comments:

They are crowded like flies in front of the closed doors of an Ohio federal building to protest the containment ordered by Governor Mike DeWine.

Why are there 2 people in Guy Fawkes masks?

They saw a movie, didn't understand it, and think they share the same values as Fawkes.

Spoiler alert: Being told to stay home to avoid catching or spreading a potentially fatal disease is not the same as religous prosecution.

Interesting bit of trivia - in the movie "V for Vendetta" the totalitarian government comes into power by releasing a bioweapon on it's own people and using the fallout and the peoples' fear to take over. Maybe they're referencing the film/graphic novel.

The woman on the left is Melissa Ackison, a Republican from Marysville running for the open District 26 seat.

If you're out of money go apply at a grocery store. Experience the shit pay, shit customers, and shit management of an essential worker. A few weeks of actual work for these clowns might change what they're protesting about.

Interviews just seem to be whiny middle age rednecks angry their lives are mildly inconvenienced because they can't get their [hair] roots done.

You missed one of best parts - the reflection of the man with hunched shoulders, back turned from the dumpster fire of humanity outside.

This whole thing is so bizarre since Trump is simultaneously on stage saying the country needs to be closed while at the same time yelling from the back of the crowd that the incompetent government needs to reopen the country.