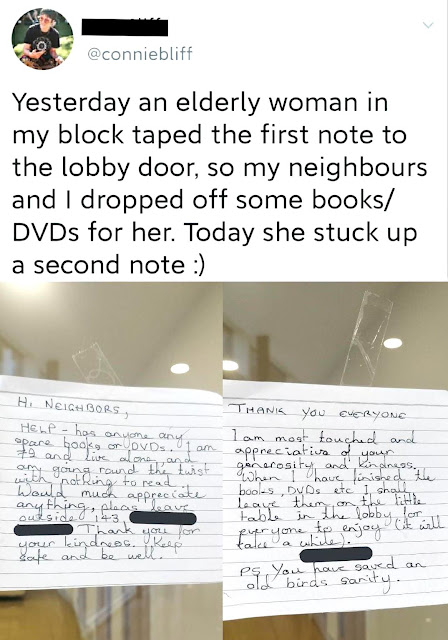 A photo illustrating "humans being bros" included a British phrase not often heard on this side of the pond:


"I am going round the twist with nothing to read."

The discussion at Reddit includes some attempts to explain the etymology:


“... all we have is just one entry in the Oxford English Dictionary, from Frank Bowen’s, Sea Slang: a Dictionary of the Old-Timers’ Expressions and Epithets, dated 1929. He said that the phrase was “an old naval term for anybody who is mad.”... Readers have pointed out that a bend in maritime terminology is a class of knots... This might suggest restraining a madman at sea by the use of ropes and knots... There’s also the related term loopy for eccentricity or craziness. Jonathon Green, in the Chambers Slang Dictionary, says that it's likewise nautical slang, dating from slightly later than round the bend... with the idea being of a person who is twisted or out of true, who is “bent” in a figuratively eccentric way. To what extent round the bend or loopy are linked to knots is unclear, and almost certainly no longer possible to discover.”