Goodbye to a classic logo

When I was growing up in Minnesota in the 1950s, the logo of the Minneapolis-based Land O'Lakes agricultural cooperative (above, with variations) was everywhere.  Today the Star Tribune reports that the company is dropping the Native American maiden from the image.

In February, the farmer-owned cooperative, founded in 1921, quietly unveiled new packaging ahead of its 100th anniversary. The new design features a facsimile of the serene lakes-and-woods landscape it has long used, minus the illustrated woman.

In some packaging, the figure known as Mia will be replaced by photos of Land O’Lakes member farmers. The words “Farmer-Owned” have been given prominent placement...

Ojibwe artist Patrick DesJarlait remade Mia in the mid-1950s. DesJarlait also created the popular Hamm’s Beer bear, and his work is represented in the collection of the Minnesota Museum of American Art in St. Paul. 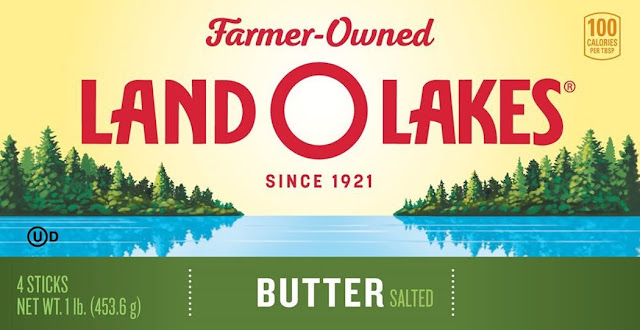 The old logo had been subject to predictable criticism (this from 2014):


H. Mathew Barkhausen III,  a writer who is of Cherokee and Tuscarora descent, has criticized the image of the Land O’ Lakes maiden, calling it stereotypical. She wears two braids in her hair, a headdress and an animal skin frock with beaded embroidery. Also, for some, the maiden’s serene countenance erases the suffering indigenous people have experienced in the United States.

The feature of the logo I remember from 60 years ago was not the fact that the maiden was Native American, but that she was female.


I know the meaning of stereotypes. I participated in protests against mascots and logos using American Indian images in the early 1990s, including outside the Metrodome in Minneapolis when Washington’s team played the Buffalo Bills in the 1992 Super Bowl. In 1993, I wrote a booklet for the Anoka-Hennepin Indian Education Program about these stereotypes. Mia was originally created for Land O’Lakes packaging in 1928. In 1939, she was redesigned as a native maiden kneeling in a farm field holding a butter box. In 1954, my father, Patrick DesJarlait, redesigned the image again...

With the redesign, my father made Mia’s Native American connections more specific. He changed the beadwork designs on her dress by adding floral motifs that are common in Ojibwe art. He added two points of wooded shoreline to the lake that had often been depicted in the image’s background. It was a place any Red Lake tribal citizen would recognize as the Narrows, where Lower Red Lake and Upper Red Lake meet...

Mia’s vanishing has prompted a social media meme: “They Got Rid of The Indian and Kept the Land.” That isn’t too far from the truth. Mia, the stereotype that wasn’t, leaves behind a landscape voided of identity and history. For those of us who are American Indian, it’s a history that is all too familiar.