Droplets generated when you say the words "Stay healthy!" 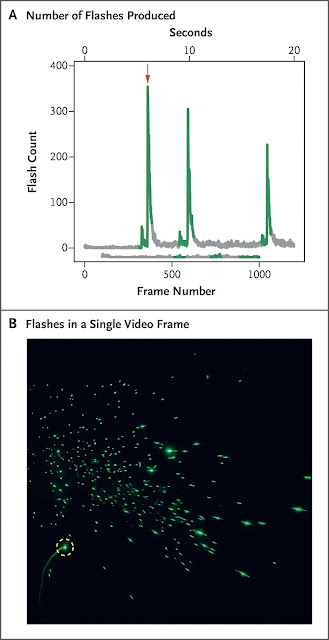 As reported in the New England Journal of Medicine yesterday:

We found that when the person said “stay healthy,” numerous droplets ranging from 20 to 500 μm were generated. These droplets produced flashes as they passed through the light sheet (Figure 1). The brightness of the flashes reflected the size of the particles and the fraction of time they were present in a single 16.7-msec frame of the video. The number of flashes in a single frame of the video was highest when the “th” sound in the word “healthy” was pronounced (Figure 1A). Repetition of the same phrase three times, with short pauses in between the phrases, produced a similar pattern of generated particles, with peak numbers of flashes as high as 347 with the loudest speech and as low as 227 when the loudness was slightly decreased over the three trials (see the top trace in Figure 1A). When the same phrase was uttered three times through a slightly damp washcloth over the speaker’s mouth, the flash count remained close to the background level (mean, 0.1 flashes); this showed a decrease in the number of forward-moving droplets (see the bottom trace in Figure 1A).

I believe similar results have been found for singing.  The source link has a brief relevant video.