Gleanings from "A Walk Through the Year" 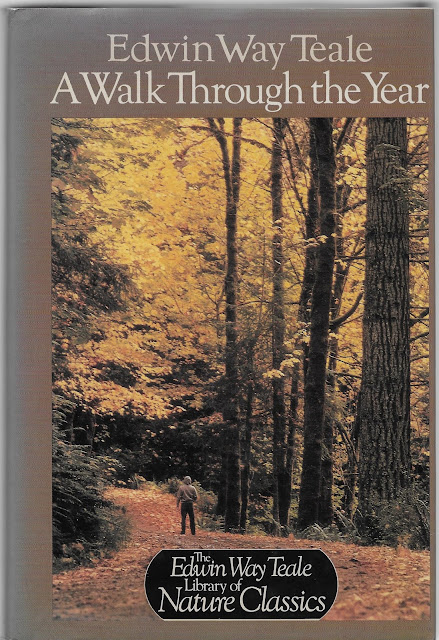 Over the years I have read and enjoyed about a half-dozen of Edwin Way Teale's books.  Here are some tidbits and interesting words from one of his classics, which I will now donate to our local library:


"At the end of my walk today, I lean on the top pole of the meadow barway while the sunset fades."  A passage into a field, closed by bars that can be lifted out of the posts.

"The [crows] had discovered a great horned owl on its nest.  This large bird of prey, a creature as fierce as a wildcat, had been pecked to death by the crows.  It might have escaped by flight but, rather than desert its two nearly fledged young, it remained, bearing the full assault of the attacking storm of birds..."

"Instead of snatching up a seed and dashing away, as is the custom of the chickadees, this bird spins in a complete circle.  In some accident of flight... it has lost the sight of one eye.  It can see only to the left... I notice that it is continually on guard, alert for danger.  By watchfulness, making the most of its one good eye, it compensates as best it can for its immense handicap.  By whirling in a complete circle, making a swift survey of its surroundings, it provides the only possible substitute for full vision... On its last trip before I turn away, it alights and rotates, carrying its good eye through a full 360 degrees, one time after another in rapid sequence until it has turned thirteen times.  Only then does it feel transiently secure.  By such extreme vigilance has the handicapped bird survived in a hostile world."

"... I wind among the pinxter flowers, the pink azaleas, in full bloom."  Or "pinkster", a type of rhododendron.

(June 13).  A description of harvesting the pollen from male (uppermost) flowers on cattails. "Mixed with batter, it will contribute to a special delicacy of this time of year - cattail-pollen pancakes.  Served with maple syrup, they possess a delicate haunting flavor vauely suggesting corn fritters."  Recipe and also here.

(July 11).  Description of a day-flying moth which has become entrapped in the flowers of a milkweed.  "Each of the clustered  flowers is equipped with five inset traps - tapering slits into which the feet of visitors may slip and become imprisoned.." Photos and discussion.

"Why is it, I wonder, that nature has provided such a host of enemies for every useful esculent?  It is truly a mystery."  Something edible, especially vegetables and mushrooms.

"When William Shakespeare's plays were first performed in seventeenth-century England, the brilliant stabs of stage lightning were produced by igniting the spore dust of the ground pine... When we came home, I threw successive handfuls of the golden dust into the fireplace.  Instantaneous bursts of blue-tinged light stabbed across our living room..."  Lycopodium powder.

The eggs of the Argiope garden spider survive the winter.  Within those eggs are transmitted all the knowledge needed for the construction of the elaborate web with its decorative stabilimentum.

If you feed birds in the winter, remember also to put out some grit or sand for them.  "Without grit in their gizzards to aid in the crushing and grinding of hard seeds, the songbirds of our winter months could not survive.  Experiments have shown that seed-eating birds deprived of grit lost weight and eventually die."

"The gray goshawk is back in the hickory tree.  For several years about this time in winter, one of these swift accipiters from the forests of the north has appeared at Trail Wood.  A genus of hawks, from the Latin word for "hawk."

"A chance encounter?  A falling into place of a vast kaleidoscope of time and space?  A happen-so without significance?  It may have been all of these."  Informal dialect word in U.S and England.

"During the night a brief mizzling fall of freezing rain encased the drifts in a thin shell of ice."  Probably a portmanteau word combining mist and drizzle.

"At the far side of the triangle, a bushlike willow is decorated with a score or more of the furry aments."  A catkin (inflorescence on willow or birch).

And finally, this profound thought:


"We change and as we change our viewpoint alters.  Nothing is ever the same again - not even the past.  We see all in a different light."