A shiny spot on the dwarf planet Ceres 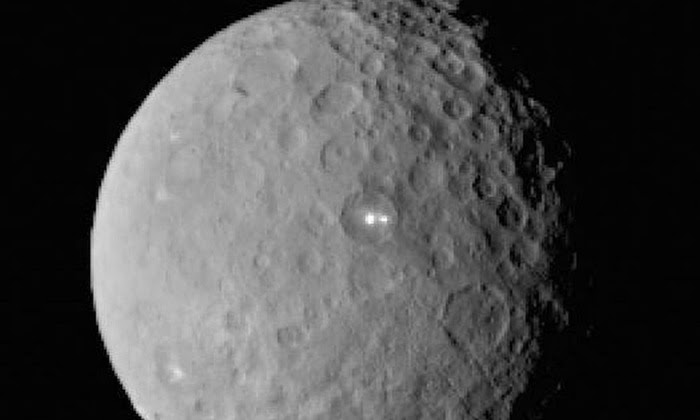 Even more impressive on the gif of planetary rotation.


The latest images from Nasa’s Dawn spacecraft reveal a pair of bright spots on Ceres, a 590-mile-wide dwarf planet, with the brightest of the two reflecting at least 40% of the sunlight that falls on it.

Scientists are unsure what the bright patches are, but given that frozen water makes up at least a quarter of the bulk of Ceres, the odds are high that they are patches of primordial ice.

There are other possibilities though. The bright spots might be the work of volcanic eruptions on Ceres that blast ice out from the body’s interior. Yet another explanation could be the materials that make up the object. Some asteroids shine brightly because of their mineral constituents. Known as enstatite asteroids, they are rich in magnesium silicates, which can reflect nearly half of the light they receive.

The Reddit thread discusses this phenomenon and the concept and calculation of albedo.  Also interesting that a 590-mile wide planet "holds enough frozen water to fill all the lakes on Earth."