A photograph of Mozart's widow? 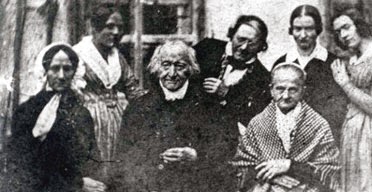 "Her hair severely parted, Constanze Weber Mozart looks unsmilingly away from the camera. She appears to be staring at her feet. Next to her is Max Keller, a Swiss composer and old family friend, surrounded by his daughters and the rest of his family. In the background is a cottage with two garden-facing windows.

The newly discovered black and white image is the only photograph ever taken of Constanze Mozart, the widow of the Austrian composer and genius Wolfgang Amadeus Mozart.

The previously unknown print was discovered in archives in the southern German town of Altötting, local authorities said on Friday, and has now been authenticated as including Mrs. Mozart, on the far left.

More details at The Guardian.  The Wikipedia entry on Constanze Mozart notes that not everyone agrees with the identity of the woman in the photo:


...it is claimed that the image was taken with a short exposure that, for technical reasons, was not yet possible in 1840. Selby (1999) states that there is no evidence in any of Constanze's extensive diaries and letters that she had contact with Keller after 1826, and that she could not have traveled to visit Maximillian Keller during the period when the photograph was taken, as she suffered from crippling arthritis at the time.