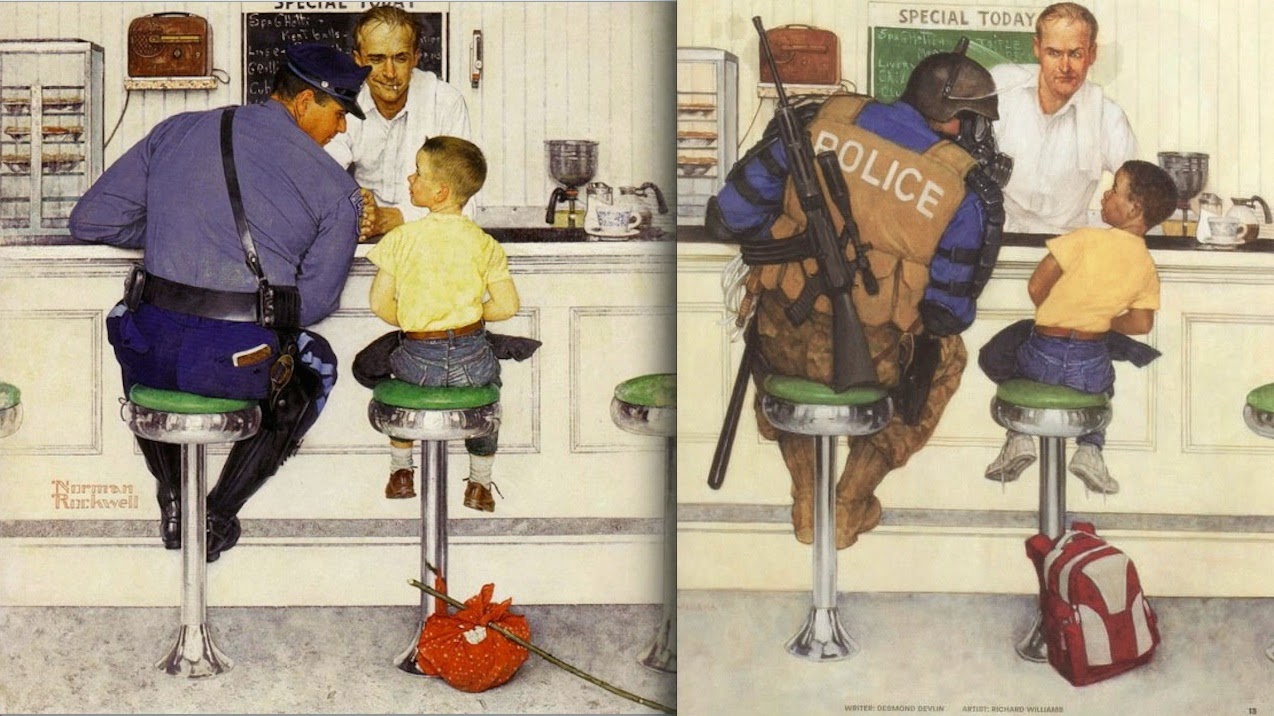 If you bookmark links and don't blog them, they multiply like coathangers in a closet.  Time to clean out a month's worth...

If the legendary romance of hopping railroad trains appeals to you (or to your child), browse the photo gallery at the top of this Reddit thread.

An article in Detroit News emphasizes that computers in cars can be wirelessly hacked.  "Markey cited studies showing hackers can get into the controls of some popular vehicles, 'causing them to suddenly accelerate, turn, kill the brakes, activate the horn, control the headlights, and modify the speedometer and gas gauge readings...'"  Jalopnik provides an example of a 14-year-old doing so using equipment he bought for $15 at Radio Shack.

"...16-year-old Maxwell Marion Morton of Jeannette, Pa., fatally shot 16-year-old Ryan Mangan in the face before taking a photo with Mangan’s body and uploading it to Snapchat..."

An op-ed piece at Jezebel asserts that "Adults should not be drinking milk."

Nissan has demonstrated a glow-in-the-dark body paint for cars.   Video at the link.

An elephant with an elastic ribbon illustrates Samuel Butler's adage that "All animals, except man, know that the principal business of life is to enjoy it."

Diane Rehm, host of a nationally-broadcast NPR program, adds her remarkable voice to the right-to-die debate after her husband, unable to get medical assistance to die, starved himself to death.  “I feel the way that John had to die was just totally inexcusable,” Rehm said in a long interview in her office. “It was not right.” 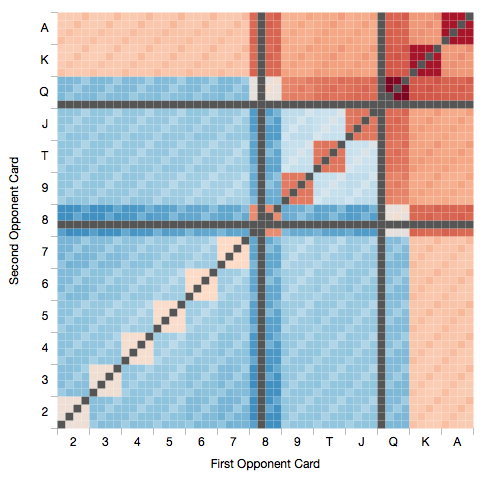 The image at right is a graphic portrayal of an analysis of 1.3 trillion hands of Texas hold-em poker.  Details at the link, where the process is interactive.

Divers are retrieving a historic typeface from the bottom of the Thames, where it was dumped a century ago.

A carnivorous plant has been identified in 40-million-year-old amber.  It had not developed digestive enzymes, relying instead on a symbiotic relationship with an insect.

A hoard of thousands of gold coins in in different denominations has been found in the Mediterranean off the coast of Israel.

Video of a man sliding down a mountain on his butt while being chased by his snowmobile.

From the Boston Globe, a gallery of 35 photos of the record snowfall in New England.

Oliver Sacks has written an article about his discovery that his ocular melanoma is metastatic and therefore terminal:


"I feel a sudden clear focus and perspective. There is no time for anything inessential. I must focus on myself, my work and my friends. I shall no longer look at “NewsHour” every night. I shall no longer pay any attention to politics or arguments about global warming.  This is not indifference but detachment — I still care deeply about the Middle East, about global warming, about growing inequality, but these are no longer my business; they belong to the future."

Rebuttal of the claim that climate-change data was falsified.

While in jail, a man punches himself in the face to get black eyes in attempt to claim that he was beaten by police; his self attack is captured on video.

A lucid explanation of the Roswell incident.

An article about a planned upgrade of the Panama Canal.  And a reminder that when you sail from the Atlantic to the Pacific through the canal, you are traveling east, not west (a good pub-quiz question).

A "lost Sherlock Holmes story" has been found.  It's not all that great, but enthusiasts will want to read it (fulltext at the link).

A man looking at watches in a Goodwill store in Arizona paid $6 for one that he was able to sell for $35,000.

Full sunlight provides about 10,000 lux of illumination.  Human eyes can see in light as dim as 1 lux.  Cats = 0.125 lux.  Tarsiers = .001 lux (and shame on people who photograph them with flash illumination).  A BBC article lists three creatures with even more sensitive eyes (able to see at illumination levels of .000063 lux).

Here's a good website:  Old and Interesting.  Go look for yourself.

I find John Oliver's sense of humor to be sometimes annoying, but one can't deny the power of some of his arguments, especially this discussion of how American judges are elected.

The graph at right depicts penis size based on 15,000 measurements of men around the world.  It's an awkward depiction; I think if the data were regraphed, it would be more understandable as a bell-shaped curve.  And when the article states that "In reality, only 2.28% of the male population have an abnormally small penis... and the same percentage an unusually large one," that's because "normality" is defined in that way - to include 95% of the population.  More discussion here.

A useful webpage from the University of Minnesota discusses how to prevent and how to treat a frozen septic system.

In an embarrassing attempt to get better positioning for postseason play, two high-school girls basketball teams tried to lose a game, missing free throws on purpose, failed to cross the half-court line in time, even pointed out to the officials that they were violating the 3-second rule in the lane.  Both schools were banned from the playoffs.

Hakim Emmanuel, an amateur bowler in Brockton, Massachusetts, rolled a perfect 900 series.  Video of his final frame at the link.

How conservative was Ronald Reagan?  Compared to 10 of today's Republican presidential hopefuls - not very.  He would only be in 5th place.

Some parents try to treat their children's autism by "giving the children enemas, using a dangerous industrial solution used for bleaching wood pulp... Miracle Mineral Solution is the brainchild of Jim Humble, who quit the Church of Scientology to form the Genesis II Church of Health & Healing in order to promote his “miracle” cure..." 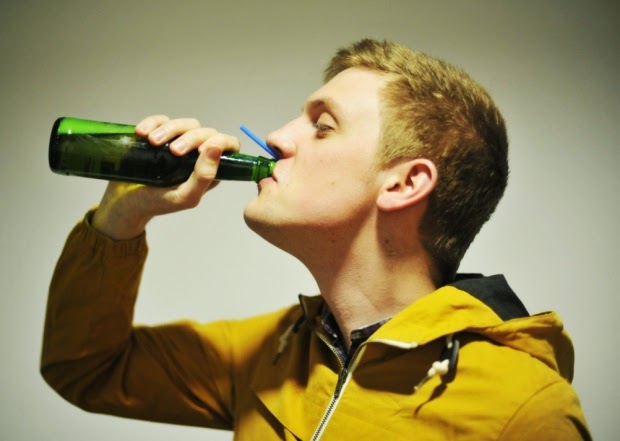 "Strawpedoing" (image left) is how students guzzle beer without creating a vacuum in the bottle.  It looks  like the straw is coming out his nose, but it's just bent at his lips,

A record drought is drying up the water reservoir for São Paulo.

"Kalaripayattu is considered to be the oldest fighting system, and the urumi — a flexible whip-like sword — is its most difficult weapon to master. An urumi wielder requires great agility and knowledge of the weapon simply to avoid self-injury." (video at the link)

A freshman basketball player for Florida State scored 30 points in the final 4:38 of a game.  "Rathan-Mayes scored 26 consecutive Florida State points without missing a shot."  His team still lost.

A police officer does not always have to show you his identification.   Exceptions include if it would jeopardize an investigation, hinder a police function, or if safety is involved.

In 2004 the New Jersey State Department of Environmental Protection initiated a lawsuit against Exxon Mobil Corporation for $8.9 billion in damages for the contamination and loss of use of more than 1,500 acres of wetlands, marshes, meadows and waters.  The suit has been quietly settled by the state for around $250 million. Also "If the settlement is completed, it is possible that some or even none of the money would go toward environmental costs in the Exxon case: An appropriations law in New Jersey allows money beyond the first $50 million collected in such cases in the current fiscal year to go toward balancing the state budget."

The United States may have an oversupply of people with PhDs.  "...only one in five PhDs in science, engineering and health end up with faculty teaching or research positions within five years of completing their degrees." One reason: postdocs are cheap labor for research labs.

A discussion thread asks truck drivers "what town or city do you refuse to stop in?"

If you are ordering airline tickets online for international travel, read this link about how to secure lower fares.

Video of 80-year-old Natalie Trayling giving a remarkable 30-minute impromptu performance on a library piano of a piece of music she made up on the spot.

A photo gallery of regrettable tattoos.

"St. Pauli pinkelt zurück."  Video explains how the application of superhydophobic materials to walls causes streams of urine to rebound onto the malefactor.

How women have used cannabis in years past to ease childbirth, to treat swollen breasts, for migraine, and for menstrual pain (Queen Victoria in the latter category).

The top image is a modern reworking of a classic Normal Rockwell painting.