Cryovolcanism and the ocean of Enceladus - updated 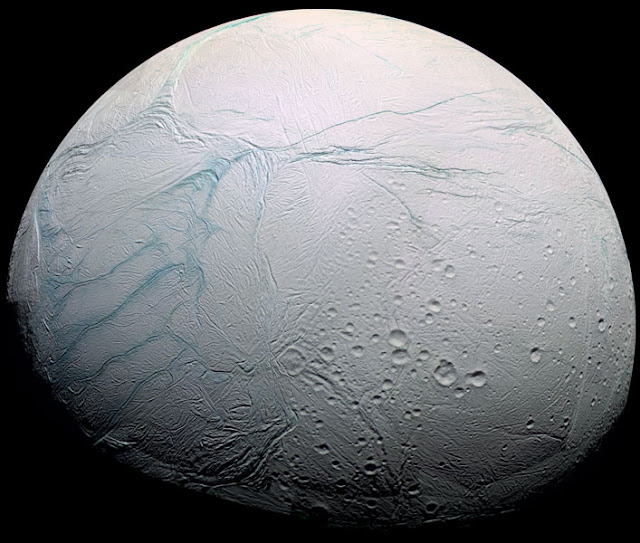 Photo from NASA's Astronomy Picture of the Day website.  And some related text from TIME:


Enceladus has always been thought of as one of the more remarkable members of Saturn's marble bag of satellites. For one thing, it's dazzlingly bright. The percentage of sunlight that a body in the solar system reflects back is known as its albedo, and it's determined mostly by the color of the body's ground cover. For all the silvery brilliance of a full moon on a cloudless night, the albedo of our own drab satellite is a muddy 12%, owing mostly to the gray dust that covers it. The albedo of Enceladus, on the other hand, approaches a mirror-like 100%. Such a high percentage likely means the surface is covered with ice crystals -- and, what's more, that those crystals get regularly replenished...

Most remarkably, Enceladus orbits within Saturn's E ring -- the widest of the planet's bands -- and just behind the moon is a visible bulge in the ring, the result of the sparkly exhaust from ice volcanoes that trails Enceladus like smoke from a steamship. It's that cryovolcanism that's responsible for the regular repaving...

In 2008, Cassini confirmed that the cryovolcanic exhaust is ordinary water, filled with carbon dioxide, carbon monoxide, potassium salts and other organic materials. Tidal pumping -- or gravitational squeezing -- by Saturn and the nearby sister moons Tethys and Dione keeps the interior of Enceladus warm, its water deposits liquid and the volcanoes erupting....

Addendum:  Reposted from 2012 to add new information from NASA - confirmation that the ocean underneath the surface ice is warm:


Sean Hsu, an astrophysicist at the University of Colorado, Boulder who helped to lead the team behind this new discovery, says the discovery happened in what was perhaps a counterintuitive way. He and his colleagues estimated the temperature, salinity, and approximate pH of Enceladus's ocean by studying the dust in Saturn's outermost ring...

"We've known from quite early on that Enceladus was the source of the material in Saturn's [outermost] ring… based on the ring's composition" Hsu says, "although we didn't know the exact mechanism for the material transfer." But the 2005 discovery of 125-mile-high icy geysers shouted out to scientists how Enceladus flung material skyward.

Hsu and his team analyzed a class of dust nanoparticles in this outermost ring. Using Cassini's mass spectrometer tool, they showed that these dust particles were made mostly of silica, and that they were the skeletons of evaporated geyser-flung saltwater. These particles point toward warm waters on Enceladus.

It just amazes me that we are now capable of studying nanoparticles in the rings of Saturn.