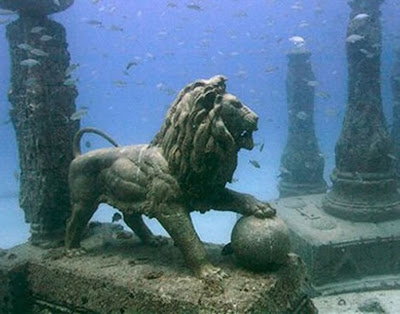 Lost for 1,600 years, the royal quarters of Cleopatra were discovered off the shores of Alexandria. A team of marine archaeologists, led by Frenchman, Franck Goddio, began excavating the ancient city in 1998. Historians believe the site was submerged by earthquakes and tidal waves, yet, astonishingly, several artifacts remained largely intact.

Update 2012:  The image, found at All That Is Interesting*, via The Ancient World, is unfortunately NOT of the Egyptian find.  A hat tip to an anonymous  reader who identified it as Neptune Memorial Reef, an underwater mausoleum of sorts for cremains.


The Atlanta-based company, Eternal Reefs, combines an individual's cremated remains with “eco-friendly cast concrete” to form what the company calls “reef balls.” There are reef ball sites off the coast of Fort Meyers and Miami, as well as Ocean City, New Jersey and Charleston, South Carolina. Loved ones of the deceased gather for a reef casting ceremony and can return to the reef site to dive, fish or examine the structure from a glass bottom boat.

*of the other sunken cities listed in that post, the Yonaguni-Jima site is probably a natural (not a man-made) feature.