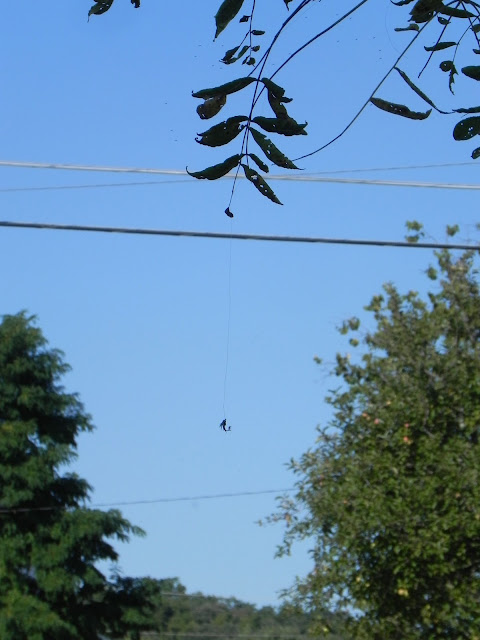 Nothing spoils your day more than watching a wild creature dying a cruel and unnecessary death.

Such was the situation I encountered when I stopped at a city park in a small Wisconsin town last weekend.  I sat down on the grass next to a bubbling stream to eat a sandwich, then noticed a fluttering in the air above me.  There, hanging vertically below the branch of a tree above the stream was a cedar waxwing, intermittently fluttering its wings. 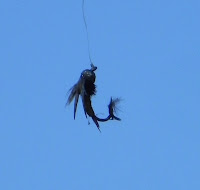 At first I thought the bird was trapped in a spiderweb, but a moment's study revealed a nearly-invisible line extending above the bird to the branch.  Apparently some fisherman had gotten a fly tangled in the tree and cut his/her line, leaving the lure (with its feathers) dangling above the water.

I was unable to reach the bird, having nothing longer with me than my trekking poles.  I stopped two passersby, but none of us could bend or climb the tree.  The hook appeared to be embedded in the bird's beak, and the bird would occasionally place a foot on it and try to pull himself up, but seemed unable to get a grip on the small lure.

I was just a half-hour from my house, so I returned home to get the longest tool available (here in the midwest, that item is a roof rake).  My wife came with me on the return trip and brought a wire cutter and a needle-nosed pliers.

By the time we got back, the bird was gone, and only the hook remained.  I hope this means the cedar waxwing was able to leverage himself off of the barb and fly away; we didn't find any evidence of a carcass in the underbrush, though he might have fallen into the water and washed downstream.

A cautionary tale for anglers.  Perhaps some birders have seen similar situations, but it was a new one for me.