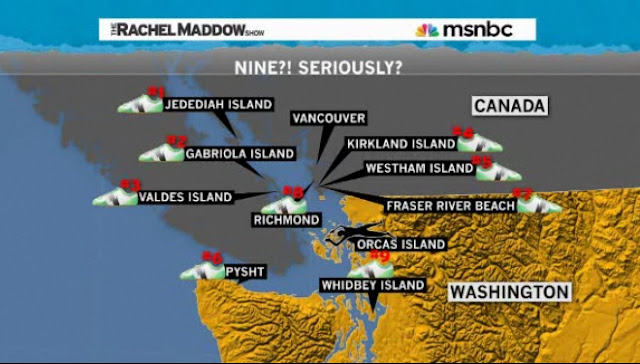 Almost four years ago when a flurry of severed feet started washing ashore in the U.S. Pacific Northwest, I created a severed feet category for this blog, never imagining that I would be writing additional posts on the subject this many years later.

It's not a fetish for me, and I don't monitor the web for additional incidents or set any Google alerts, but having posted so many stories in the past, I now have a set of readers alert to new developments.  Thus it was that when I took a few days off to attend to family matters, Mike and a couple anons posted comments, and Phil sent me an email - all alerting me to another one of these bizarre incidents.

The severed foot, with a "leg bone" protruding from its running shoe, was discovered on August 30; depending on how the feet are enumerated, this can be considered the 11th incident.  AOL has covered the story (briefly), with a link to a report on the incidents by Rachel Maddow (from August 2010, after the ninth foot was found).  ABC News has a report (via Neatorama). The Vancouver Sun also has a brief article about this most recent incident, and there was some detailed coverage in an apparently undated report in Outside magazine online.  None of these sources have any significant details about the most recent event, which obviously is still under investigation.

My understanding re the huge Japanese tsunami is that it is too early for debris from that incident to start washing ashore in North America (due to arrive in the spring of 2013).

Addendum:  A hat tip to Nathanial Hoodrich for finding a recent article on this subject in the National Post, which included this better map (click for bigger): 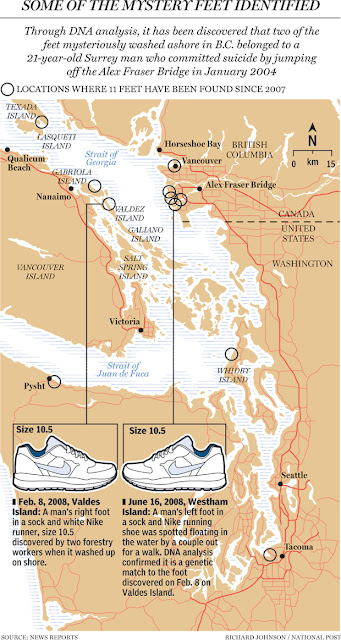